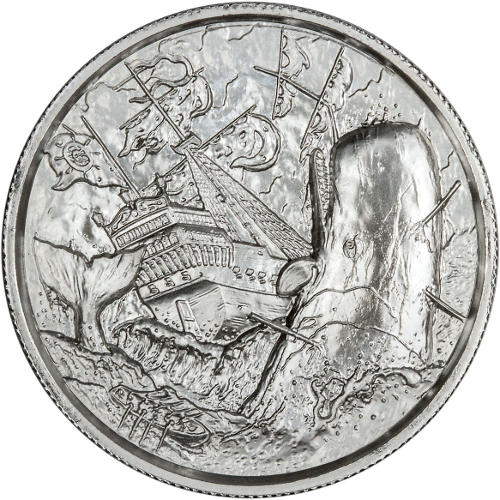 The Privateer Series from Elemetal Mint is an engaging collection of ultra-high relief silver rounds that focuses on the life of pirates and privateers from a bygone era on the high seas. Each new release has its own unique obverse design, while all rounds share a common reverse design theme. The 2 oz Elemetal Silver The White Whale Ultra High Relief Round is now available to you online at Silver.com.

White whales are actually referred to scientifically as the beluga whale, an Arctic and sub-Arctic species of cetacean. These marine mammals are referred to as simply beluga, melonhead, sea canary, or occasionally white whale. The use of sea canary refers to the high-pitched twitter the creatures use in communication with one another.

All Privateer Series silver rounds, including the 2 oz Elemetal Silver The White Whale Round, are dynamic ultra-high-relief rounds, and are produced by striking silver blanks numerous times under immense pressure, giving the design fields a 3D look and feel.

On the reverse of the 2 oz Elemetal White Whale Silver Round you’ll find the common design theme used on the reverse of all rounds in the collection. In this design you’ll notice a human skull set against a backdrop of a ship’s wheel. The pirate motto “No Prey, No Pay” is found above the design, with the round’s weight, metal content, and purity struck below.

The obverse of the 2 oz Elemetal White Whale Privateer Series Silver Round includes its own unique design. You’ll notice the commonly used privateer’s ship rocking violently in the waves as a massive white whale crests the water’s surface with harpoons sticking out from its body. Pay close attention, and you’ll notice the reverse design elements on the flag flying from the stern of the ship.

Elemetal Refining was formally founded in July 2015. It began a year earlier as a joint venture between Ohio Precious Metals, NTR Metals, and Provident Metals, with OPM taking on the mint’s official operation capacity and brand name in 2015.

We encourage all Silver.com customers to contact us with questions. You can reach out to us on the phone at 888-989-7223, online using our live chat, and via our email address.