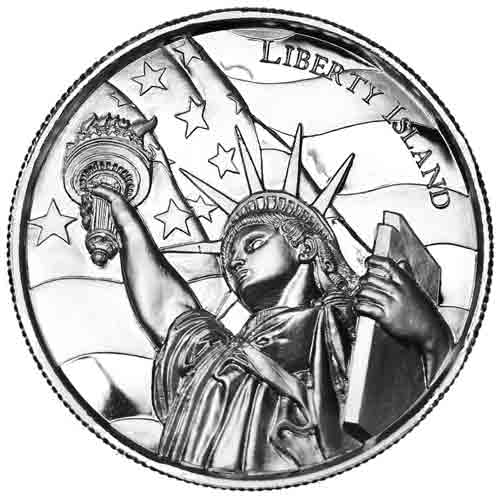 Any quantity available for $6.49 per oz over spot!

The Statue of Liberty was gifted to the United States by the people of France in 1880, and dedicated upon its completion in New York Harbor on October 28, 1886. The statue, created by Gustave Eiffel (the same man who constructed the Eiffel Tower in Paris), stands 151 ft. high and consists of more than 200,000 pounds of copper.

Each 2 oz Elemetal Silver Liberty Island Round in this Silver.com product listing is available in brand-new condition from the mint. These are part of the American Landmark Series and represent the second release in the series following the Grand Canyon Silver Round. All rounds in the series are produced in ultra-high relief and have impressive 3D visuals.

On the obverse of these round you’ll find the image of the Statue of Liberty, viewed from the bottom as if you were looking up at the brilliant statue. The American flag decorates the background of the round’s design, and the words “Liberty Island” are engraved on the right.

The reverse side of the rounds features a depiction of the North American continent. This particular design is used on the reverse of all American Landmark Series silver rounds, and includes a detailed geographic map of the continent that displays the mountains, rivers, and lakes found on the landmass.

Elemetal Mint and Elemetal Refining is the operational name for the largest private mint in the United States. A collaborative effort of Ohio Precious Metals, Provident Metals, and NTR Metals, the mint was founded late in 2014 and reformed in July 2015 with OPM taking on the Elemetal brand name for production purposes.

If you have questions, Silver.com associates are available at 888-989-7223, online using our live chat, and via email.