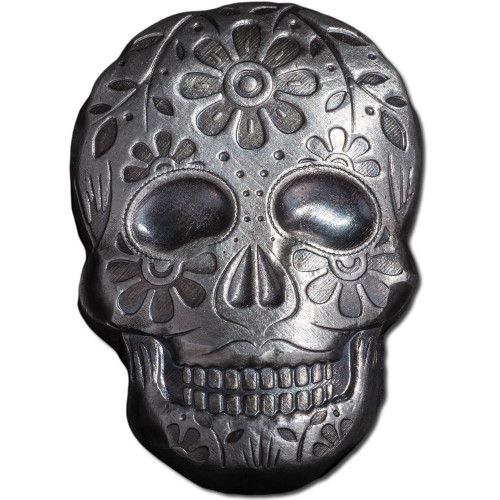 Mexico’s Day of the Dead celebration is one of the most widely-known cultural celebrations in the world today. Originally celebrated primarily by the people of central and southern Mexico, it is now a national public holiday throughout the country and is commonly celebrated throughout the United States, as well by Mexican Americans. Today, the 2 oz Silver Monarch Day of the Dead Skull Bar is available to purchase on Silver.com.

Despite its name as the Day of the Dead, this public holiday in Mexico is actually a celebration of life. Family and friends will gather during Day of the Dead celebrations to remember those family members who have passed away, and to pray for them as they make their great spiritual journey.

Known originally as Die de Muertos, this holiday was first celebrated by Mexicans during the summer months prior to the 16th century. The arrival of Spanish conquistadors and Western European, Christian culture in the 1500s forced the holiday into alignment with the traditional celebrations of All Saints’ Eve, All Saints’ Day, and All Souls’ Day from October 31 to November 2nd.

An important part of the Day of the Dead celebration was the construction of private alters to honor family members, and the use of sugar skulls as representations of those individuals. Although the term calavera, associated with sugar skulls, can mean any artistic skull design, it was originally the decorative, edible candy skulls made from sugar that inspired this.

On the reverse side you’ll find all the important engravings of the bar. At the top is the “MPM” combination that forms a crown, which is the logo for Monarch Precious Metals. Additional engravings include the weight, metal content, and purity of the bar.

Monarch Precious Metals was founded in the Rogue Valley of southern Oregon in 2008. All bars from the mint are hand-poured and hand-stamped for a traditional, rustic appearance to the products. Also, each product has a guaranteed minimum fineness of .999 silver or gold.

Please don’t hesitate to contact Silver.com with any questions. You can reach our customer service team at 888-989-7223, connect with us online through our live web chat, or simply send us an email.