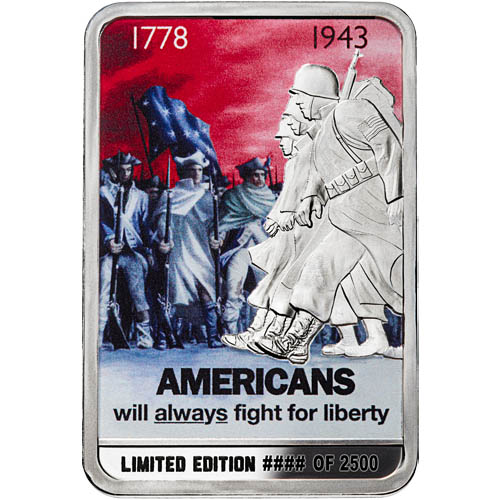 Any quantity available for $22.00 per oz over spot!

The silver bars for sale in a new Osborne Mint Series include beautiful, colorized designs inspired by World War II-era propaganda posters. The first of those designs available at Silver.com is features American soldiers through the generations “fighting for freedom’s sake.” Today, the 2 oz Silver Americans Will Always Fight for Liberty Bars are available to you online at Silver.com.

In order to bolster support for the entrance of the United States into World War II, the government produced a wide range of propaganda posters. These posters had multiple goals that included convincing Americans to conserve resources at home so those precious resources could be redirected to the war effort. Other goals included getting Americans to volunteer for the Armed Forces so the US had proper troop levels to defeat the Axis powers.

All of the 2 oz Silver Americans Will Always Fight for Liberty Bars in this product listing come with a custom-fitted protective capsule to secure the bar. The colorized designs on the obverse and the strike of the design elements on both sides. Included with your purchase today is a numbered Certificate of Authenticity from the Osborne Mint that matches the serial number on the obverse of the bars.

The obverse design field of 2 oz Silver Americans Will Always Fight for Liberty Bars features American soldiers fighting for the sake of liberty across the centuries. In the colorized background field, Continental Soldiers from the Revolutionary War stand in formation wearing blue coats with a red sunset in the background. In the foreground, American soldiers of World War II march in formation in front of their brethren from the Revolutionary War. The soldiers in the background have a date mark of “1778” above them, with the silver World War II soldiers offering a date of “1943.” At the bottom, there is a unique serial number between 1 and 2,500.

On the reverse side of 2 oz Silver Americans Will Always Fight for Liberty Bars is a depiction of American troops in action during World War II. While the solider in the foreground fires his Tommy gun for cover, troops in the background advance. The Osborne Mint’s mint mark of “OM” is depicted on this side.

Please don’t hesitate to contact Silver.com customer service with your questions. You can reach out to us on the phone at 888-989-7223, chat with us live online, or email us directly.