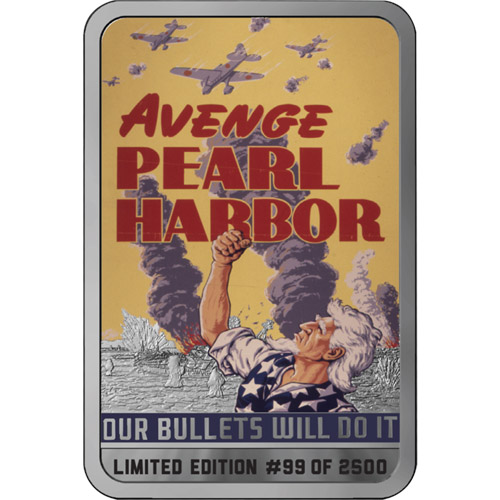 You have the opportunity to buy silver bars online that are truly stunning in design with the release of the Fight for Freedom’s Sake Series. Designed by Osborne Precious Metals, the 2 oz silver rounds have colorized obverse designs that reflect the propaganda posters used to drum up war support in the United States during World War II. Now, 2 oz Silver Avenge Pearl Harbor Bars from the Fight for Freedom’s Sake Series are available to you for purchase online at Silver.com.

The Japanese attack on Pearl Harbor occurred on December 7, 1941, a date that then-US President Franklin D. Roosevelt proclaimed was one that would live in infamy. The Imperial Japanese Navy feet launched a surprise attack on the US Pacific Fleet at Pearl Harbor Naval Air Station using fighters and torpedo bombers.

The attack crippled the United States Navy, sinking cruisers and four battleships, but did not land the decisive blow the Japanese had hoped. The US Navy Pacific Fleet’s aircraft carriers were out on maneuvers at the time and were not damaged in the attack. This enabled the United States to more swiftly respond, turn on a heel, and launch attacks on Japanese-conquered islands in the Pacific.

The obverse of 2 oz Silver Avenge Pearl Harbor Bars shows a replica of one of the popular propaganda posters used by the federal government to generate interest in America joining World War II after more than two years of neutrality. The images of the sky, the Japanese fighters, and Uncle Sam are all colorized as the original posters would have been.

On the reverse side of the 2 oz Silver Avenge Pearl Harbor Bars is a common design element featured throughout the series. The bars have a depiction of American GIs providing cover fire to one another to advance on enemy positions.

These 2 oz Silver Avenge Pearl Harbor Bars are available in custom, protective capsules and come with a Certificate of Authenticity. Each bar has a unique serial number marked on the obverse with an inscription of LIMITED EDITION #XXXX OF 2500.