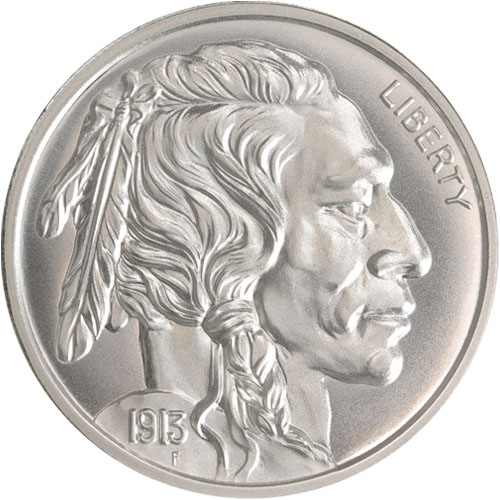 James Earle Fraser is a native of Winona, Minnesota who spent his early years living in the Upper Midwest. His father was an engineer with the railroad and Fraser often traveled throughout the region alongside his father on work-related duties. Fraser’s upbringing in this part of the country is reflected in the designs he created for the US nickel.

In 1911, it was decided by President William Howard Taft’s administration to add the US nickel to the list of coins to undergo a redesign. Being replaced on the nickel was the Liberty image from Charles E. Barber, the US Mint Chief Engraver at that time. Many of Barber’s designs appeared on coins including the dime, quarter, and half dollar and were designed in 1892.

On the obverse side of 2 oz Silver Buffalo Rounds is the image of a Native American. Fraser crafted this right-profile portrait based on the facial features of three different tribal leaders alive during the early 20th century. The portrait includes engravings similar to the actual Buffalo Nickels, with “Liberty” along the design rim to the right and a commemorative date mark of “1913” in the lower left along with an “F” for Fraser’s last initial.

The reverse of 2 oz Buffalo Rounds includes the image of an American bison. The bison, also known as a buffalo, was vital to the life and survival of native tribes throughout the Plains. The bison depicted here is based on Black Diamond, a bison that was a resident of the Central Park Zoo in New York City in the early 20th century.

These 2 oz Silver Buffalo Rounds are available to purchase in Brilliant Uncirculated condition. The rounds feature protective packaging and are issued by the Intaglio Mint with an “I” mint mark on the reverse face between the weight mark and above the purity and metal content marks.

We always encourage Silver.com customers to reach out to us with questions at 888-989-7223. You can also connect with us online through our live chat and email address features. Silver price charts on our website help you keep tabs on the changing value of silver at any time.