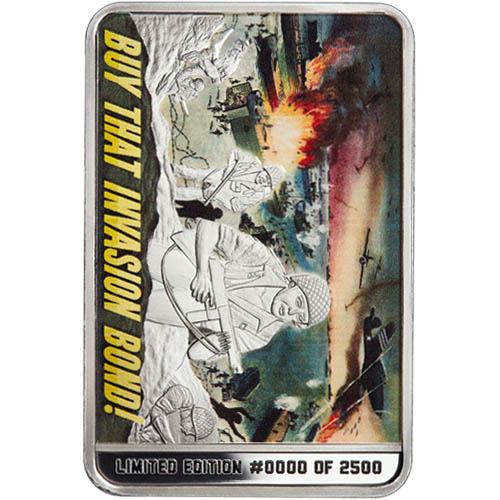 The second release in the Fight for Freedom’s Sake Series from the Osborne Mint shows the American people why it is necessary to support the war effort. American soldiers are going to be fighting in dogged battles overseas, and in order to emerge victorious, the nation’s armed forces require guns, bullets, tanks, planes, and ships to get the job done. Right now, the 2 oz Silver Buy the Invasion Bond Bar is available to purchase online at Silver.com.

Each of the 2 oz Silver Buy the Invasion Bond silver bars for sale in this listing comes with its own custom-fitted capsule. The bars feature an individual Certificate of Authenticity from the Osborne Mint as well, with the obverse design elements hand-engraved onto the surface of the bars.

The Fight for Freedom’s Sake Series focuses on the colorized propaganda posters the US government used to garner the support of the American public for the war effort. In the case of war bonds, the government sold bonds to the public that were used to generate funds for the production of war materials to keep the troops fighting.

The obverse of the 2 oz Silver Buy the Invasion Bond Bar showcases some of the imagery commonly used at the time. To give the American people a strong sense of what the nation was up against, dramatic scenes such as this one showed them just what the fight looked like and what it would take to win.

The colorized field in the background of this design brings the haze of battle to life. The sun is a distant feature of the design, with much of the imagery covered in the fog of war with subtle tones. This all occurs as the backdrop to the silver finish in the foreground as American forces advance on a beachhead trying to establish a foothold.

On the reverse side of the 2 oz Silver Buy the Invasion Bond Bar is a design used throughout the four-bar series. In this design, an American soldier stands tall and fires off rounds from his Thompson to provide cover fire so his squadmates can advance.

If you have any questions, Silver.com can help. Please call us at 888-989-7223, chat with us live online, or simply send us an email with your inquiries.