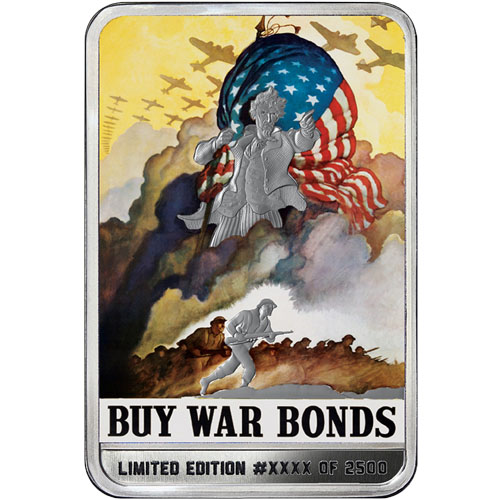 As early as the summer of 1940, the United States government began addressing the issue of how to finance a war in the event it was pulled into World War II. The government eventually settled on going with a voluntary loan system known as the national defense bond program. The federal government would encourage Americans to support the war effort with the purchase of these bonds, playing on the memories of the Liberty Bonds from World War I. Today, 2 oz Silver Buy War Bonds Bars are available to you online at Silver.com.

The federal government put the War Finance Committee in charge of handling the sales of war bonds and the War Advertising Council in charge of promoting the voluntary compliance of Americans in purchasing bonds to help support the war effort. The latter council would eventually come up with countless propaganda posters to promote the purchase of war bonds, using all means available to get the word out to Americans.

All of the 2 oz Silver Buy War Bonds Bars in this product listing at Silver.com come with custom-fitted capsules to house the bar. Each one comes with its own Certificate of Authenticity from the mint and a unique serial number. The silver for sale in this series features hand-engraved designs that are colorized on the obverse and boast proof elements that include frosted fields and mirrored backgrounds.

Obverse images on the 2 oz Silver Buy War Bonds Bars include an enraged Uncle Sam. The personification of the federal government is captured in brilliant silver with a powerful, large American flag flapping in the breeze over his shoulders and behind his back. Standing amidst the destruction of the attack on Pearl Harbor, Uncle Sam directs American forces out on the offensive to hit back at its enemies. Overhead, an endless array of American bombers fill the skies as American GIs storm forward at the bottom of the bar design.

Reverse designs on the 2 oz Silver Buy the War Bonds Bars include the common element used throughout the series. Here, American GIs provide covering fire for one another as they advance in teams toward the enemy to take back land and knock out enemy positions.

Please feel free to reach out to Silver.com with any questions you have about these bars. You can call us on the phone at 888-989-7223, chat with us live online, or email us directly.