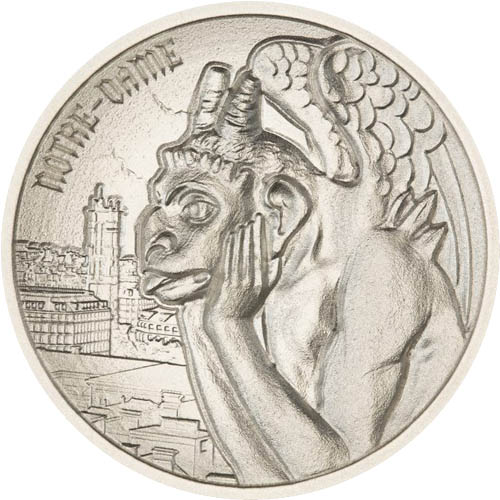 In the latest collection from the Intaglio Mint, gargoyles take the center stage in a series known as Gargoyles of the World. These grotesque figures have been a part of the functional design on temples, cathedrals, and monuments around the world for thousands of years. Now, Intaglio Mint focuses its creature efforts on a new beast with each release type in this series. The 2 oz Silver Gargoyle Round Type II is now available to you for purchase online at Silver.com.

The gargoyles visible on many of the world’s structures completed after the 18th century are more ornamental in nature than functional. While these grotesque figures have taken many different forms, from human-beast combinations and chimeras to dragons, it seems the original purpose of the gargoyle was to help funnel water off of ancient structures.

In fact, the term gargoyle comes from the French word gargouille, which means throat or gullet. This was an appropriate name for the beasts given early renditions of the creatures appeared on Egyptian and Greek temples with downspouts coming out of the throat and mouth to help remove rainwater from the roof.

On the obverse side of these 2 oz Silver Gargoyle Rounds is the image of one of the many gargoyles that adorn the Notre Dame cathedral in Paris. The cathedral itself is one of the most beautiful Catholic churches in the world and was originally completed around 1250 with construction and additions continuing well into the 14th century.

The particular gargoyle featured on this side is one of the more demure figures to adorn the structure. One might say this particular gargoyle looks downright bored as his head rests in his hands and his tongue sticks out a bit as he gazes out at the cityscape of Paris. However, the Roman poet Ovid once referenced this exact creature as one that eats human flesh. Charles Meyron created etchings of this beast in the 1850s and referred to it as the Stygra. He insisted that it was a personification of lust.

For the reverse design in this series, all 2 oz Silver Gargoyle Rounds share a common element. The background field resembles the ornamental design of gothic stained-glass windows and an inscription of “Gargoyles of the World” that includes a small gargoyle perched on the “O” in “Gargoyle.”

These 2 oz Silver Gargoyle Rounds are available to purchase individually inside of protective flips or in mint tubes of 10 rounds. Each one is in Brilliant Uncirculated condition.

We encourage Silver.com customers to call us with questions when they buy silver at 888-989-7223. You can also connect with us online through our live chat and email address.