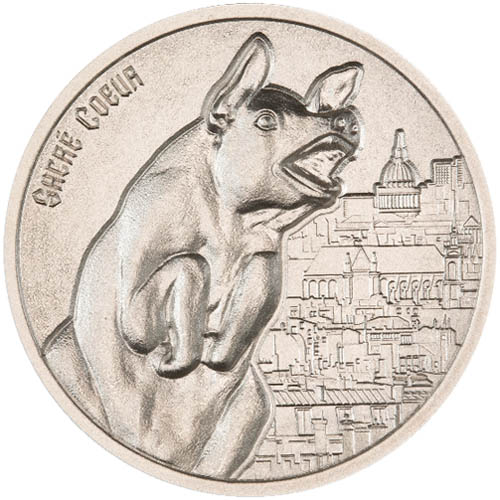 Many of the designs you will find in the silver rounds for sale in the Gargoyles of the World collection come from actual structures around the world. Further, many of the gargoyles of hundreds of years old and have looked out over some of the world’s major cities as time and progress have passed them by. Now, 2 oz Silver Gargoyle Type IV Rounds are available to you for purchase online at Silver.com.

The first two designs in the Gargoyles of the World Collection from the Intaglio Mint focused on some of the many famous gargoyles that adorn Notre Dame in Paris, France. After the series went stateside to the US in the third release, it now returns to the second-most-popular religious tourist site in Paris.

Sacre Coeur is French for the Basilica of the Sacred Heart of Paris. The religious site was built between 1875 and 1914 on the highest geographic point in the city of Paris. It was built as a form of national penance for France’s defeat in the 1870 Franco-Prussian War and located in the Paris commune to mark the most rebellious neighborhood of the capital city.

The obverse face of each 2 oz Silver Gargoyle Round in the Type IV design release features a pig gargoyle from the exterior of the structure. The backdrop has a cityscape from the surrounding neighborhoods in Paris and captures the pig as the dominant figure of the foreground. A humble engraving of “Sacre Coeur” is inscribed along the upper-left field of the round.

On the reverse side of 2 oz Silver Gargoyle Rounds, you will find the image of the “Gargoyles of the World” inscription. This is the name of the broader series and it features an oversized “O” at the center of the design element with a gargoyle perched atop the letter. Around the outer edge of the design field is a Gothic window-frame design that encircles the entire design element.

These 2 oz Silver Gargoyle Type IV Rounds are available in Brilliant Uncirculated condition as brand-new items from the Intaglio Mint. Each individual round is packaged in a plastic flip, while multiples of 10 will ship with a tube.

Silver.com customer service is available to you at 888-989-7223. Alternatively, you can connect with us on the web through our live chat and email address features.