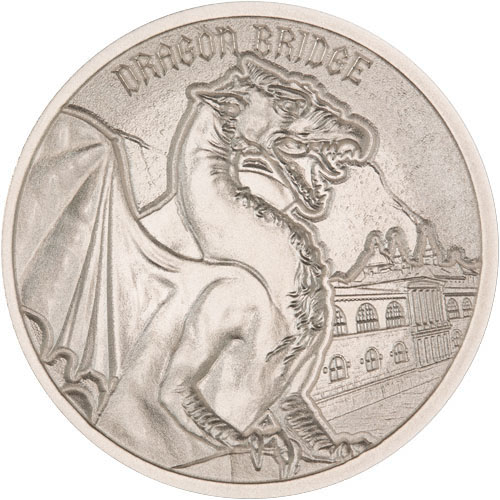 The Gargoyles of the World Collection from the Intaglio Mint is like so many of its other collections in purpose, but unlike any other in terms of design. While collections such as the Molon Labe Series focus on new obverse designs with each release type, the designs in that series represent the ancient Greek city-state of Sparta. The Gargoyles of the World Collection has new obverse rounds for each new release type focusing on the architectural beats. Today, 2 oz Silver Gargoyle Rounds are available to you online at Silver.com.

Scholars had previously dated the first examples of gargoyles to the Medieval period of European history, but later discoveries would prove that the hideous architectural beasts had much older roots in human history. Early examples of gargoyles include those adorning Egyptian temples and others on Greek temples.

All of the 2 oz Silver Gargoyle Rounds in this product listing are in brand-new condition from Intaglio Mint. Individual specimens in this series are packaged inside of plastic flips, while multiples of 10 are housed inside of mint tubes. These silver rounds are produced as ultra-high-relief specimens. An ultra-high-relief silver round is one that has its design elements struck several times onto the blank with immense pressure. The result is a deep surface area with greater 3D visual depth.

On the obverse side of the 2 oz Silver Gargoyle Rounds, you will find the imposing image of a ferocious dragon. This beast is shown perched on the ledge of a concrete block with its foreclaws gripping the edge of the block. Its wings are raised back behind its figure and the dragon’s mouth is open. In the distant background, the capital city of Ljubljana, Slovenia, is featured in the design element.

The gargoyle in the Dragon Bridge design comes from the road bridge in Ljubljana crossing over the Ljubljanica River. It connects the capital city’s two sides between Kopitar Street and Ressel Street and was constructed by the Austro-Hungarian Empire when it controlled the area in the early 20th century.

The reverse side of the 2 oz Silver Gargoyle Rounds includes a common design element used in all releases of the series. This Gothic-themed design features a rim element that looks similar to stained glass with the phrase “Gargoyles of the World” across the center. There is a small gargoyle perched atop the “O” in the word gargoyles.

Please don’t hesitate to contact Silver.com with your questions about silver for sale. We are available to you on the phone at 888-989-7223, online through our live chat, and via our email address.