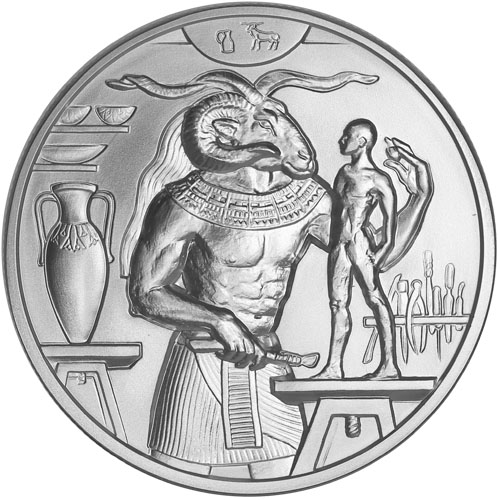 The Egyptian god Khnum is one of the earliest Egyptian deities worshipped by the people and various cultures in Ancient Egypt. Believed to be the true source of the Nile River, Khnum was associated with life and creation, though he is also known as a builder. Right now, 2 oz Silver Khnum Rounds from the Egyptian Gods Series are available to purchase online at Silver.com.

Each of the 2 oz Silver Khnum Rounds in this product listing come from the Egyptian Gods Series. These rounds are all high-relief specimens struck under intense pressure during coining to create design elements with greater 3D relief and sunken background fields. The individual silver rounds purchased here are in plastic flips, while multiples are available in groups of 10 in tubes of groups of 250 in boxes.

Khnum is said to be the god responsible for the source waters of the Nile River. His depictions in the human form by Ancient Egyptians featured a man with the head of a ram pouring water from a clay pot that would eventually flow to form the Nile River. In real life, the Nile River is a proven source of life in northeast Africa. Its annual floods bring soil-enriching silt and clay to the local soil.

On the obverse of the 2 oz Silver Khnum Round in the Egyptian Gods Series, you’ll find that human depiction of the god Khnum. The design features some of the most important symbols of Khnum, who was believed to be a creator god for humans as well. He would use a potter’s wheel and clay to make humans to implant in the wombs of mothers. In this design, he stands at his potter’s wheel crafting a man out of clay.

The reverse side of all 2 oz Silver Khnum Rounds is the image of a ram at an altar. The ram was the Earthly representation of the god Khnum, and engravings on this face include “2 oz 999 Ag” to denote the weight, purity, and metal content.

If you have any questions, please don’t hesitate to contact Silver.com. You can reach our customer service team at 888-989-7223, chat with us live online, or simply send us an email with your questions.