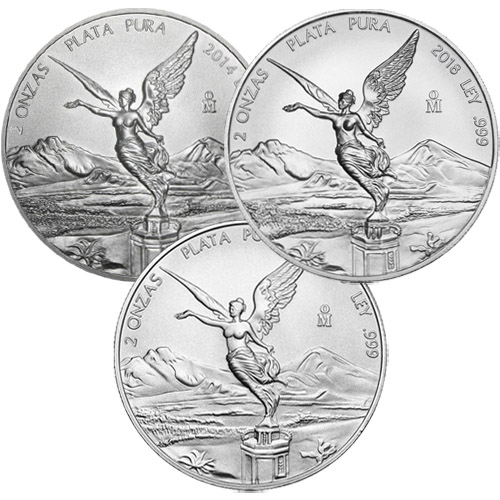 The silver coins for sale from the Mexican Mint are anchored by the Mexican Libertad Series. Introduced in 1982, the series first featured a 1 oz coin and has grown to include fractional-ounce coins and three weights above 1 oz silver. Now, 2 oz Silver Mexican Libertad Coins are available to you for purchase online at Silver.com.

The Mexican Mint introduced the Silver Libertad coins in 1982 with a 1 oz coin. The program was based on the Gold Mexican Libertad introduced one year earlier. Both coins share the same design elements on the obverse and reverse. The only difference in coin designs is in the fractional-ounce coins. These items do not have the 10 historic versions of the national seal around the modern seal on the reverse.

Mexican Libertads are inspired by the gold Centenario the Mexican Mint issued in 1921. That coin program featured a front-facing image of Winged Victory and was released to mark the nation’s 100th anniversary of independence from Spain. When the Mexican Libertads first appeared, the coins had the same design of Winged Victory from the Centenario. That has since been modernized.

On the obverse side of 2 oz Silver Mexican Libertad Coins, you will find a depiction of Winged Victory from the Mexican Independence Victory Column. The monument was erected in Mexico City in 1921 for the nation’s 100th anniversary of independence. Included in the background field are the mountains of Popocatepetl and Iztaccihuatl.

The reverse face of the 2 oz Silver Libertad Coin bears the modern coat of arms for Mexico. The national seal includes a Mexican golden eagle on a cactus branch as it battles a snake. This is immediately surrounded by 10 historic versions of the same seal previously used by the government of Mexico.

These 2 oz Silver Mexican Libertad Coins are available here with a protective plastic flip and arrive in Brilliant Uncirculated condition. This is a random-year listing, so we are unable to guarantee the date mark of the coin you receive. Please keep in mind you could receive several matching date marks if you buy multiple coins. Those date marks range from 1996 to the present.

Silver.com customer service is available to help answer your questions at 888-989-7223. We are also available on the web using our live chat and email address features.