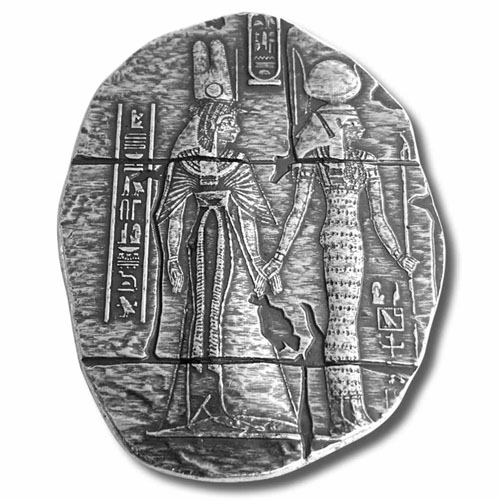 The Ancient Egyptians looked to their gods and goddesses for guidance in their lives and to help explain the events of the world around them. The names of many of these gods and goddesses live on to this day in global culture, but other earlier goddesses have been forgotten. The latest Egyptian-themed release from Monarch Precious Metals combines Egypt’s early- and late-era deities on a beautiful silver bar. Right now, 2 oz Silver Monarch Egyptian Goddesses Relic Bars are available to purchase online at Silver.com.

Each of the 2 oz Silver Monarch Egyptian Goddesses Relic Bars in this product listing comes to you inside of a natural linen bag. The bag holds only one bar and is enclosed with a hemp drawstring. In true Monarch Precious Metals fashion, none of these bars is exactly the same as another. This is done on purpose.

Monarch Precious Metals strikes the design on each of these bars by hand and off-center, on purpose, to ensure the visuals are not 100% identical between any two products. Additionally, the bars feature an antique patina and anti-polish that create the appearance of an ancient coin passed down for centuries. The shape of each bar is distinctive as well, with Monarch Precious Metals aiming to create a product that looks as though it is a stone slab chipped right off of an ancient tomb.

On the obverse side of the 2 oz Silver Monarch Egyptian Goddesses Relic Bar is the depiction of the goddesses Hathor and Mut. Hathor is one of the earliest goddesses recorded in Ancient Egyptian culture and is believed to be the mother of all goddesses that would come after. Mut is another primal deity who is believed to have given birth to all living things through water.

The reverse face of 2 oz Silver Monarch Egyptian Goddesses Relic Bars depicts the goddesses known as Isis and Ma’at in seated positions. Isis has long been one of the most revered and remembered goddesses from the ancient era. She is associated closely with Hathor and is known as the mother of all Egyptian pharaohs. Ma’at is a personification of various characteristics and beliefs, but is also said to control the actions of morals and other deities.

If you have any questions when you buy silver bars, please feel free to ask. Silver.com customer service is available to you at 888-989-7223, online using our live chat, and via our email address.