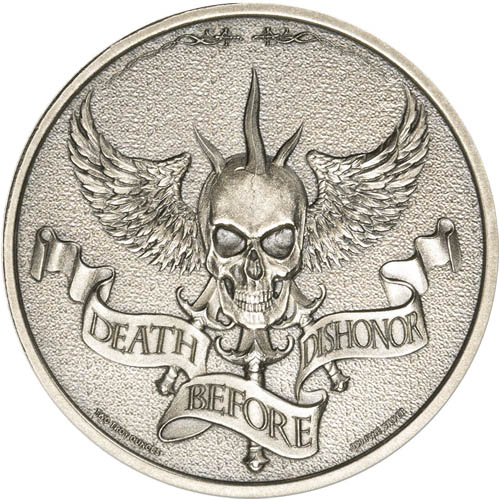 The Intaglio Mint offers a wide variety of silver for sale to collectors. Each one of its designs is thoughtfully designed and intricately struck onto 1 oz and 2 oz silver blanks. Its various designs are cataloged into different collections, with ancient themes among its more stirring designs. The Morte Prima di Disonore is just one example and comes from its Latin Allure range. Right now, 2 oz Silver Morte di Disonore Rounds are available to purchase online at Silver.com.

Each 2 oz Silver Morte Prima di Disonore Round in this listing is available to you with either an individual protective plastic flip or a mint tube containing as many as 10 individual rounds. The design in this series fits the motif of the Latin Allure collection. It offers a glimpse into one of the ancient world’s central concepts involving one’s honor.

Throughout the history of human civilization, the concept of honor has been held in high regard. Some believe that a man’s honor is the very means by which is value can be measured. This concept was not unique to Western civilizations, as the Samurai warrior class of feudal Japan had its own focus on honor and means of ensuring one’s honor rather than living with dishonor. This was known as Bushido.

In Ancient Rome, the phrase Morte Prima di Disonore arose as a concept that death was preferable to continuing to live with dishonor attached to your name. This extended to the field of battle, where soldiers would adopt the hardline of fighting to the last man, to the last life, rather than surrendering to a superior force. It was also applicable in one-on-one situations, such as duels.

On the obverse of 2 oz Silver Morte Prima di Disonore Round is the image of a human skull wearing a Roman helmet. The helmet is pierced at the top by a Roman short sword, or broad sword, that comes out from the mouth of the skull. This ensures that the wearer is definitely dead, but no doubt died with honor.