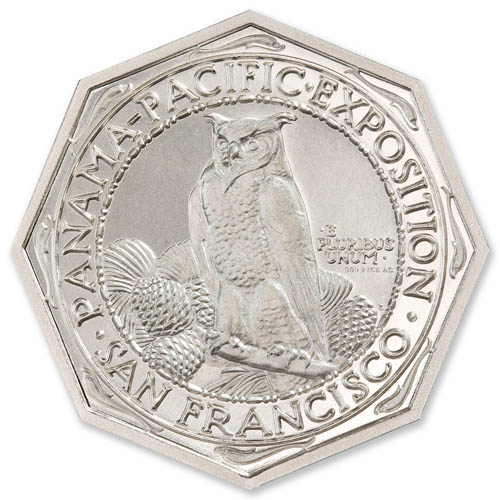 Typically when you shop silver for sale, the silver rounds you find take on the traditional circular shape of coins. In the case of a new 2 oz silver round from Intaglio Mint, silver rounds take on a fresh shape that is distinctive and eye-catching. Right now, 2 oz Silver PanPac Octagonal Rounds are available to purchase online at Silver.com.

Each 2 oz Silver PanPac Octagonal Round in this product listing is available with an individual protective plastic flip or a mint tube of up to 10 silver rounds. Each one is in brand-new condition and features eight clearly-defined edges with its octagonal shape.

The Panama-Pacific International Exposition was a world’s fair hosted by the city of San Francisco to celebrate the completion of the Panama Canal. Constructed along the narrowest strip of land in Central America, the Panama Canal offered a quicker link between the Atlantic Ocean and the Pacific Ocean, opening up faster trade routes by sea from the US East Coast to the West Coast.

San Francisco was chosen as the host city in the United States to help showcase the rebirth of the town. San Francisco had been nearly leveled by a massive earthquake in 1906, but by 1915 it was rebuilt in large part and the world’s fair site was constructed on 636 acres of land between Presidio and Fort Mason along the north shore. The area is now known as the Marina District.

On the obverse of 2 oz Silver PanPac Octagonal Rounds is a depiction of Minerva. The Roman goddess of wisdom and skill, Minerva is featured on this side of the round in left-profile relief with a crested battle helmet on her head and a shield at her side. Within the design field, there are inscriptions of the US national motto and the 1915 date mark on the shield in Roman numerals. Around the border rocker are inscriptions of the nation of issue and the weight and metal content.

The reverse field of 2 oz Silver PanPac Rounds includes an owl perched on the branch of a Ponderosa pine. The owl is associated closely with Minerva as it is a symbol of wisdom. Inscriptions around the border rocker on this side include the name of the PanPac expo and the host city.