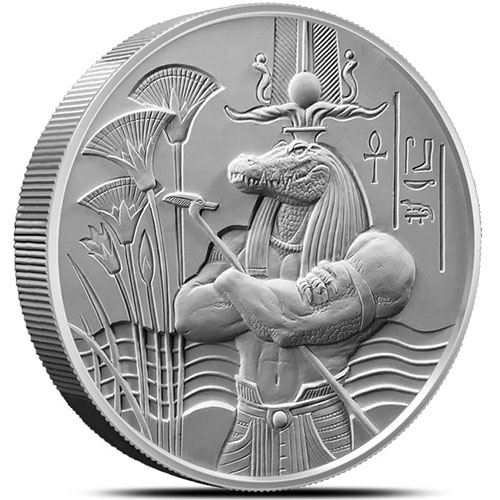 For investors or collectors buying silver online, there are countless options to consider. While silver bullion bars and sovereign coins are great, silver rounds offer the same silver content in many cases and more variety in design than you find with a lot of sovereign-mint issued coins. Today, 2 oz Silver Sobek Rounds are available to you online at Silver.com.

Ancient Egypt’s history stretches from the earliest periods of established dynasties, known as the Early Dynastic Period, in 3100 BC to the era of Sasanian Egypt that culminated around the year 629 AD. Throughout the breadth of this time period stretching over nearly 4,000 years, Ancient Egyptians worshipped a number of gods and goddesses.

Among those Ancient Egyptian gods with true staying power was Sobek. First noted in texts during the Old Kingdom around the year 2686 BC, Sobek was associated with the power, fertility, and military prowess of Egyptian pharaohs. He was also used by average Egyptians as a protective deity one would worship to ward off the dangers of the Nile River. Sobek was worshipped through the Roman era and early Byzantine era of rule in Egypt in 350 AD.

All 2 oz Silver Sobek Rounds are available as the third release in the Egyptian Gods Series from the Sunshine Mint. The rounds are high-relief blanks with brilliant 3D renderings on the obverse and reverse faces indicative of a particular Ancient Egyptian deity. Individual coins ship in protective flips, with multiples of 10 shipped in tubes and multiples of 250 (25 tubes of 10 rounds each) in boxes.

The obverse of the Sobek Round includes an imposing figure of Sobek. He was frequently depicted in one of two forms: as a male human being with the head of a crocodile, or entirely as a crocodile. Sobek’s figure on this face is powerful and masculine, with a scepter in his crossed arms and symbols of the Nile included in the background design elements.

On the reverse of the 2 oz Silver Sobek Round are the common features of a pyramid, hieroglyphs, and a table altar. What’s different on this design is the use of hieroglyphs specifically tailored to Sobek, such as fish and symbols of water. On the worship table, a full crocodile figure represents Sobek in animal form.

Please don’t hesitate to contact Silver.com with questions. Our customer service team is available at 888-989-7223, online using our live chat, and via our email address.