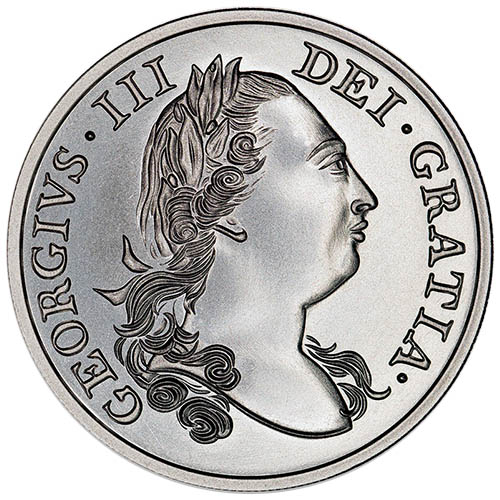 The state of Virginia is one of the oldest inhabited regions within the modern United States. Jamestown, Virginia was the site of the first, and oldest, permanent settlement by the British along the Eastern Seaboard of North America. During the colonial era of America, Virginia was a hub for the colonies and was the only one allowed to produce its own coinage. Today, 2 oz Silver Virginia Shilling Rounds are available to you online at Silver.com.

Throughout its time as a colony of the British Empire in North America, Virginia was the only region permitted under British law to coin its own currency for use in the colony. The most popular of these was the copper halfpenny, but in 1774 a silver shilling was introduced by the colony.

From the Intaglio Mint’s Colonial Tribute Series, these silver rounds are available to you inside of protective plastic to protect the condition of the round. Each 2 oz Silver Virginia Shilling Round reflects the actual design used on those silver shillings. The design of Virginia’s silver shillings was actually based upon the gold guineas issued by the British crown from 16163 to 1814. The first machine-struck coins produced by the Royal Mint, guineas featured the monarch of Great Britain on the obverse and a coat of arms on the reverse.

The reverse of these Silver Virginia Shilling Rounds features its own coat of arms, though not one you would have found on the gold guineas produced by the Royal Mint. Those featured royal arms of the reigning monarch, while the Virginia Shillings bore the Crowned Arms of Virginia.

On the obverse of the 2 oz Silver Virginia Shilling Round is the effigy of King George III. Throughout his long reign, various portraits of the King featured on the gold guineas. They all had a common theme of capturing the King with longer hair in right-profile relief. King George III’s long reign ended sadly as he spiraled into dementia and mental delusion prior to his death at age 81.

Intaglio Mint is located in Waco, Texas. The three-man operation opened up in 2010 and focuses on creating unique, collectible silver products.

We encourage Silver.com customers to contact us with questions at 888-989-7223. You can also reach out to us online through our live chat and email address.