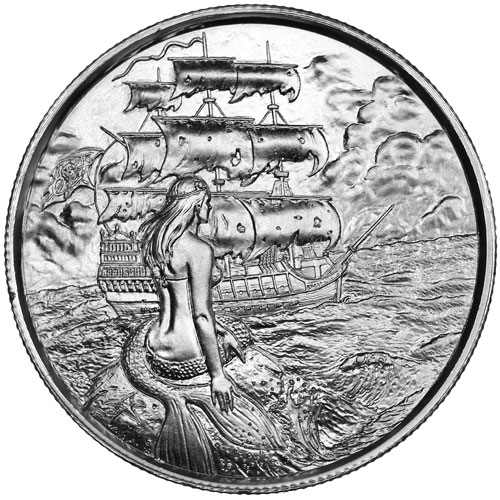 Elemetal Mint is garnering attention for its newly branded precious metal products with inspiring designs and beautiful finishes. As part of the Privateer Series of high-relief rounds from the mint, an all-new 2 oz high-relief silver round has been released that lives up to the expectations of the collaborative precious metal refiner. Now, the 2 oz Elemetal Mint Silver Siren High Relief Round is available on Silver.com.

The Privateer Series from Elemetal Mint features 2 oz high-relief silver rounds that commemorate the life of pirates on the high seas. In this particular product, the tales of sirens from throughout human history merge with those of the pirates and privateers from the Golden Age of pirating in the Caribbean.

Sirens were commonly mentioned in pirate tales during the 16th and 17th century, but the history of the siren dates back to Greek mythology. During Homer’s Odyssey, Ulysses and his men suffer yet another setback in their return from the Trojan War when a siren’s beautiful and mesmerizing song attracts them to their doom on a rocky cliff.

The reverse side of the 2 oz Elemetal Mint Silver Siren High Relief Round features a beautiful siren upon a rock in the foreground. In the middle ground, a famous pirate ship turns its rudder to steer toward potential death and destruction upon the rocks of the siren’s island. High seas and ominous clouds in the background serve as signs of the doom awaiting the men at the hands of the siren.

On the obverse is the common design that will feature on all Privateer Series rounds. Reminiscent of the Jolly Roger, a human skull is featured in the center of a ship’s wheel. Engravings surrounding the image include the motto “No Prey No Pay,” and the rounds’ weight, metal content, and purity.

Elemetal Mint was founded as a collaborative refining effort by NTR Metals, Provident Metals, and Ohio Precious Metals. The latter company changed its name in 2015 to Elemetal Mint, and serves as the primary producer for the brand.

If you have questions, reach out to Silver.com. Our associates are ready to help at 888-989-7223, online using live chat, and via email. If you are interested in similar products, be sure to check out our full selection of Silver Rounds.