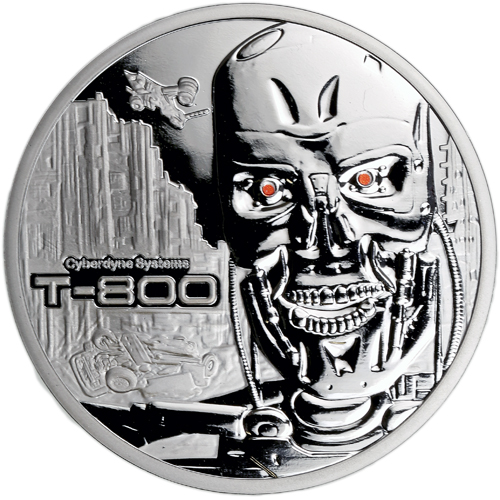 Few things were as frightening to moviegoers in the 1980s than the sight of the Terminator hunting down first Sarah Connor, and later her son John. Represented in the role by action hero Arnold Schwarzenegger, the T-800 cyborg was an unstoppable killing machine that left many moviegoers on the edges of their seats. Today, the 2 oz Silver Stardust Terminator T-800 Round is available on Silver.com.

More and more often investors are turning to rounds, and unique designs such as this one, as a way to invest in silver as they are a great alternative to silver bars due to their low premiums over silver spot price.

Sarah Connor didn’t pose much of a threat in 1984, except for the fact that she was the mother of the man who would go on to bring down the Skynet system of machines that ruled the world in 2029. Fearing for its own safety, Skynet sent a Cyberdyne T-800 cyborg, known as the Terminator, back to 1984 to deal with Connor.

In the first film of the franchise, released in 1984, Schwarzenegger played the T-800 and chased Connor throughout the urban and suburban stretches of Los Angeles and Southern California. Though Connor would survive, the Terminator would return in subsequent movies to chase down her son and eventually protect him from future cyborgs.

Each of these 2 oz Silver Stardust Terminator T-800 Rounds is available in brand-new condition, and includes a brilliant proof finish. These rounds all have edge lettering that identifies their place in the production cycle, and ships with a Terminator-themed Certificate of Authenticity to validate that serial number.

On the obverse of each round is the image of the Terminator T-800’s face, complete with those haunting and vacant red eyes that indicate it is active and ready for the kill. Behind the Terminator you’ll find the path of destruction it left behind in its search for Connor.

The reverse side of the coin features the full tagline featured at the start of the original film in the franchise, along with a full-size Cyberdyne Systems Model 101 T-800 blueprint. Engravings include the film franchise’s name, and the round’s weight, purity, and metal content.

Each of these silver rounds was struck by Sunshine Mint in Coeur d’Alene, Idaho for distribution by Stardust Silver, which is located in Las Vegas, Nevada in the “Silver State.”

If you have questions, please don’t hesitate to ask. Silver.com associates are available at 888-989-7223, online using our live chat, and via our email address.