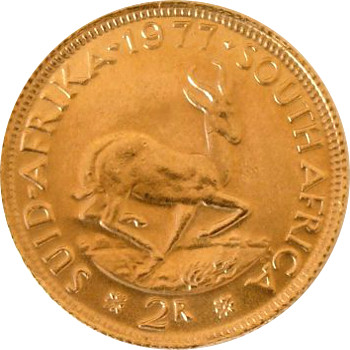 South Africa’s gold coins were once among the most popular, highly-coveted coins in the world. For decades, the Krugerrand was the gold bullion coin that every investor wanted to have in their collection. Alongside the Krugerrand, the 2 Rand Gold South African coin was among the most popular ever minted. Today, the 2 Rand Gold Coin is available in Almost Uncirculated condition from the years of our choice.

The 2 Rand Gold Coin was produced at the South African Rand Refinery between 1961 and 1983. The coin contains the same dimensions and level of purity found in the British Sovereign Gold Coin. Original Rand coins were first introduced in 1961 by the South African government with 1, 2, 10, and 20 rand denominations. The designs and colors were similar to the pound notes used under English colonization to ease the transition to South African coins.

2 Rand Gold South African coins bear the image of Jan van Riebeeck on one side, and a gazelle on the other side of the coin. Van Riebeeck was a Dutch colonial administrator and the founder of the city of Cape Town. He served as the 1st Commander of the Cape from 1652 until 1662. Engravings on this side include “Eendrag Maak Mag,” and the English phrase “Unity is Strength.”

The gazelle on the opposite side can be seen running through an open field. Engravings on this side of the coin include “Suid Afrika,” the year of minting, face value, and English language translation of “South Africa.”

The South African Rand Refinery no longer operates, and now the South African Central Bank serves as the central minting facility for the government of South Africa. The facility is one of the few privately-owned national facilities in the world, and was just the fourth to open outside of the United Kingdom and Europe. These coins are available in Almost Uncirculated condition, meaning they have small traces of wear visible on the highest points of the coin.

Silver.com is committed to making your purchasing process simple and secure. If you have any questions about the 2 Rand South African Gold Coin, contact our associates by phone at 888-989-7223 or use our live web chat feature.