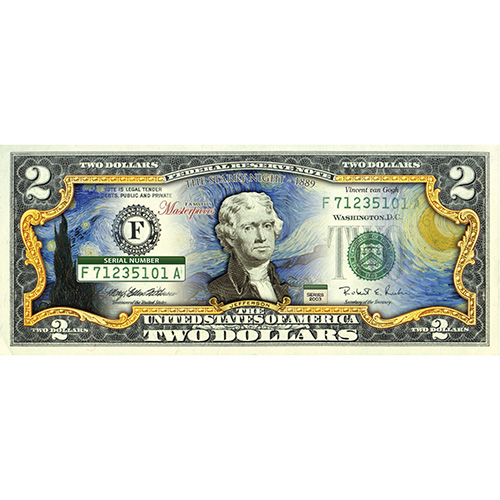 Vincent Van Gogh was a Dutch painter in the 19th century whose pioneering techniques greatly influenced the world of post-Impressionist art. His most popular painting is undoubtedly Starry Night, a majestic, sweeping, and somewhat abstract depiction of a village at night. While the village itself is somewhat tame, the night sky, with its sweeping, entrancing swirls, casts a dreamlike spell over many who view it. Now, $2 Starry Night by Vincent Van Gogh Legal Tender Notes are available to you for purchase online at Silver.com.

All $2 Starry Night by Vincent Van Gogh Notes are delivered inside blue folios that include a Certificate of Authenticity. Using authentic legal tender notes from untouched Federal Reserve packs, the Merrick Mint has applied a stunning replication of Starry Night to their obverse design. This would be the perfect gift idea for anyone who loves painting or art in general.

Vincent Van Gogh is considered one of the leading figures in the post-Impressionist movement that ran from 1886-1905. This movement emphasized unnatural geometric forms, symbolism, and heavy applications of paint. Starry Night is a quintessential post-Impressionist work in that it depicts an ordinary scene, namely a village at night, and gives it a surreal, dreamlike quality. Rather than evoking reality, it calls to mind a sense of mystery and awe and reminds us of the different ways we can view the world around us.

Thomas Jefferson is shown on the obverse of $2 Starry Night Legal Tender Notes. Behind the 3rd president of the United States, you’ll find a rendering of Van Gogh’s Starry Night in full color. There’s not enough space to include the full painting, but its most famous elements, including the sky and the trees, are clearly visible. Additionally, there are notations that read Vincent Van Gogh, The Starry Night 1889, Famous Masterpieces.

John Trumbull’s iconic Declaration of Independence painting is shown on the reverse of Starry Night by Vincent Van Gogh Legal Tender Notes. The image recreated here is from June 28th, 1776, when John Adams, Benjamin Franklin, Thomas Jefferson, and others presented a draft of the Declaration to John Hancock. In reality, fewer people were present at this meeting, but Trumbull believed his version heightened the drama and significance of the moment.