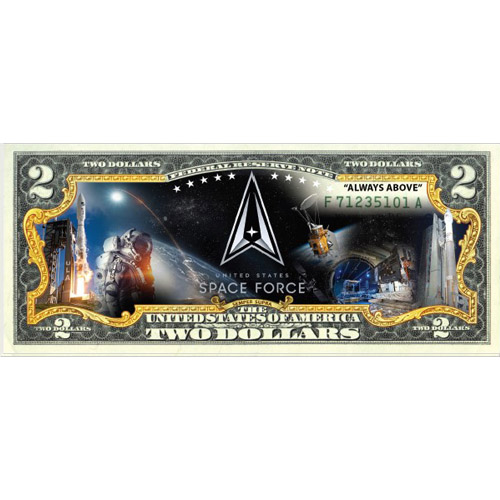 The US $2 bill is the second-smallest denomination of Federal Reserve Note in production at the Treasury today. Its lack of use in circulation has given rise to the sense that the $2 bill is rare in nature, even though plenty of the $2 bills are produced each year. Since 1862, the United States has issued $2 bills in various forms as US Notes, National Bank Notes, silver certificates, Treasury Notes, and Federal Reserve Bank Notes. As of 1928, President Thomas Jefferson has featured on all $2 bills, including the modern Federal Reserve Notes introduced in 1976. That year also saw the introduction of the reverse design from John Trumbull still in use today.

The obverse side of the $2 United States Space Force Legal Tender Note includes the classic bust of President Thomas Jefferson at the center without any colorization added. The bland background field has, however, been filled in with HD graphics that showcase the realm of operation for the US Space Force.

It is the role of the US Space Force to take over operations of all systems that occupy the realm of space, from rockets to satellites and weapons systems. The Space Force is a sister-branch of the US Air Force, much like the US Marine Corps is a dependent branch of the United States Navy.

On the reverse face of $2 US Space Force Legal Tender Notes, you will find John Trumbull’s depiction of the signing of the Declaration of Independence. Though the design debuted on the bills in 1976 with the release of modern Federal Reserve Notes, the artist and his work date to 1818 when he created the painting.

These $2 United States Space Force Legal Tender Notes come with a blue bi-fold folio that protects and displays the $2 bill, while also offering a Certificate of Authenticity.