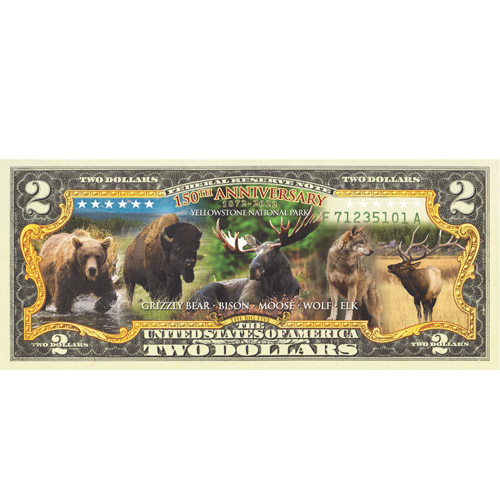 Yellowstone National Park was established by Congress in 1872 and signed into law by President Ulysses S. Grant on March 1, 1872. The park covers a total of 3,468.4 square miles across the northwest corner of Wyoming and extends north and west toward Montana and Idaho. Among the most prominent features of the park is Old Faithful geyser.

All of these $2 Yellowstone National Park 150th Anniversary Big Five Animals Legal Tender Notes are available to you with individual packaging. These notes are housed in bi-fold folios with a Certificate of Authenticity included on one side of the folio. These legal tender, US Federal Reserve Notes are in clean, crisp, uncirculated condition and have been enhanced by the Merrick Mint to feature additional design celebrating the animals that call Yellowstone National Park home.

The Big Five Animals of North America feature in the enhanced, colorized obverse of the Yellowstone National Park 150th Anniversary Big Five Animals Legal Tender Note. The design element captures photographic images of each of the animals. The images here capture the natural beauty of the Grizzly bear, the mighty American bison, a Moose, a Gray Wolf, and an Elk.

An oil painting depicting the presentation of the Declaration of Independence is featured in the reverse design of $2 Yellowstone National Park 150th Anniversary Big Five Animals Legal Tender Notes. This painting from John Trumbull was commissioned in 1817, completed in 1818, purchased by the government in 1819, and eventually put on display in the Rotunda of the U.S. Capitol in 1826.

Please feel free to contact Silver.com with your questions. Our team is available at 888-989-7223, online using our live chat, and via our email address.