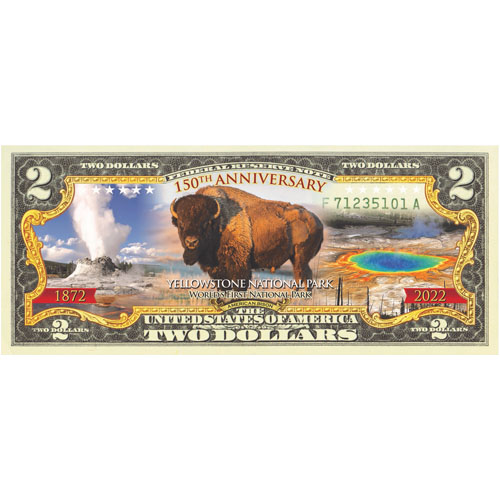 During the administration of President Ulysses S. Grant, the 18th President of the United States of America, Yellowstone National Park was established as a federally protected site in the western United States. More than just the first US national park, Yellowstone is widely regarded as the world’s first-ever national park. Right now, $2 Yellowstone National Park 150th Anniversary Bison Legal Tender Notes are available to purchase online at Silver.com.

Each of the $2 Yellowstone National Park 150th Anniversary Bison Legal Tender Notes available here comes in presentation books. The bi-fold booklets hold the note on one side with the Certificate of Authenticity on the other. Merrick Mint has enhanced these notes with colorized visuals on the obverse side to honor the 150th anniversary of Yellowstone National Park. These notes are legal tender Federal Reserve Notes in clean, crisp, uncirculated condition.

The obverse of the Yellowstone National Park 150th Anniversary Bison Legal Tender Notes features the imposing figure of the American bison in the center. This is flanked on either side by scenes from within the park, most notably, that of Old Faithful on the left side of the design element. Yellowstone National Park is famous for its wildlife, such as the bison, and its variety of geothermal features. In fact, Yellowstone Lake within the park is among the largest high-elevation lakes on the continent and is set above the Yellowstone Caldera. This caldera is the largest supervolcano on the continent.

On the reverse of $2 Yellowstone National Park 150th Anniversary Bison Legal Tender Notes is John Trumbull’s 1818 oil painting. This work was commissioned in 1817, completed by Trumbull in 1818, and acquired by the federal government in 1819. When the $2 Federal Reserve Note was introduced in 1976, this design was chosen for the reverse.