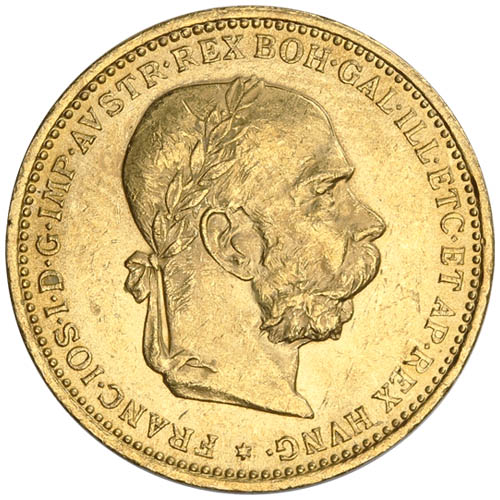 Franz Joseph I remains the third-longest reigning monarch in European history after serving as the Emperor of Austria and the King of Hungary from December 1848 until his death in November 1916. His reign of 68 years ranks behind only King Louis XIV of France and Johann II of Liechtenstein. Right now, 20 Corona Gold Austrian Coins are available to purchase online at Silver.com.

In a random year offering the Silver.com warehouse team selects your gold coins at random when your payment is processed for shipping. The coins you receive are based on availability in our warehouse at this time and we cannot guarantee or promise a particular date mark. If you purchase more than one coin in this listing you may receive multiples of the same date mark.

20 Corona Gold Austrian Coins were introduced by the Austrian Mint in 1892 when the Austro-Hungarian Empire accepted the gold standard as the backing for its currency. The 20 Corona Gold Coin is the most popular denomination from this series which ran through 1916.

On the obverse of 20 Corona Gold Austrian Coins is the image of Emperor Franz Joseph I, the reigning emperor for the Austro-Hungarian Empire throughout most of its existence. Franz Joseph I ruled from the age of 18 in 1848 when the empire was formed through the combination of the Austrian Empire and the Kingdom of Hungary. He held dual titles as the Emperor of Austria and King of Hungary from December 1848 until his death in November 1916.

The reverse of all 20 Corona Gold Austrian Coins features the crowned arms of the Austro-Hungarian Empire. The official seal includes a crowned double-headed eagle with the shield of the empire.