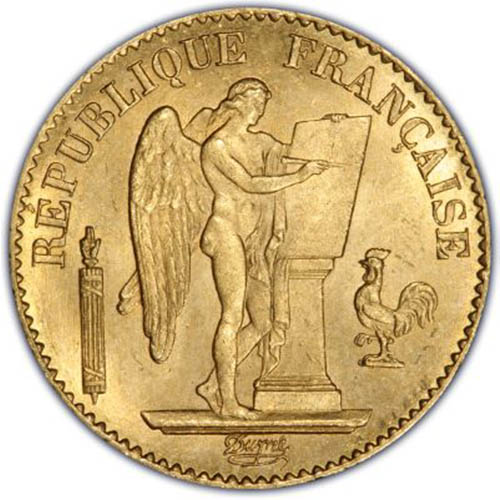 The 20 Francs gold coins from France have been issued by the empire and republic of France, as well as other nations in continental Europe during the 19th century. Designs on the 20 Francs Gold Coins have ranged from portraits of the leaders of France to the French Rooster and the rare Guardian Angel. Today, 20 Francs Gold Coins are available to you online at Silver.com.

The first appearance of the Guardian Angel of France, known to some as Genius, came in 1792 during the reign of King Louis XVI. The king’s portrait appeared on the obverse with the Guardian Angel on the reverse. Augustin Dupre was the man behind the design of the Angel coinage of the era, which included a face value of 24 livres.

All of the 20 Francs Gold Coins in this listing bear the Angel design and arrive in protective plastic. The year of issue available runs from 1871 to 1898. Though the Guardian Angel design was available on gold coins in other eras as well, the design was not the same as these coins.

On the obverse of the 20 Francs Gold Coin listed here is the Guardian Angel design. Her winged figure is depicted writing on the French constitution as she stands at a pillar. The coin also features the French Rooster and an engraving of “Republique Francaise.” Augustin Dupre created this imagery.

Dupre began his career as an engraver at France’s royal factory for weapons. By 1770, he was established in the city of Paris and began engraving his first medals. He eventually held the position of 14th Graveur general des monnaies, which translates into English as Engraver General of Currency.

The reverse of the 20 Francs Gold Coins with Angel design includes the circular wreath with the legend in the center. This legend offers the face value as “20 Francs” along with a year of issue. Around the outside of the wreath is an engraving of the national motto of “Liberte Egalite Fraternite.”

Please feel free to reach out to Silver.com customer service with your questions. You can call us on the phone at 888-989-7223, chat with us live online, or simply send us an email.