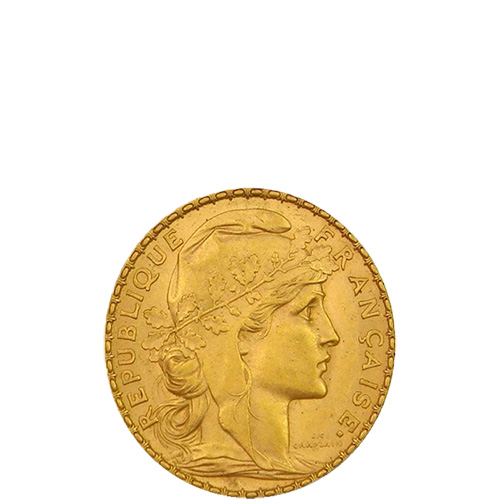 Each of the 20 Francs France Gold Coins in this listing comes with a protective plastic flip to house the coin. Each specimen is available in AU+ condition. Referred to as About Uncirculated or Almost Uncirculated, this term refers to a coin with extremely light to trace wear on the highest points of the design elements only. The coins maintain medium to full luster. The inclusion of “plus” with the AU rating indicates the coins are among the better quality AU coins.

The obverse side of 20 Francs France Gold Coins in this listing comes with the female personification of France, Marianne. Her figure has long been used on French coins and in French art as a symbol of Liberty and reason. Shown in right-profile relief, she wears a cap on her head with a wreath crown. Inscriptions include “Republique Francaise.”

On the reverse face of 20 Francs France Gold Coins is the famed Gallic Rooster, the image that gives this particular design series from the mint its name as 20 Francs Gold Rooster Coins. The Gallic Rooster has long been an unofficial emblem of the nation and remains in popular use as the symbol of the French national soccer team.

Each one of these coins comes with 90% gold content. These were last issued by the Paris Mint in 1914 on the eve of World War I and the design was not revived in the aftermath of the war. Founded in 846, the Paris Mint is the sovereign mint of France and represents the oldest institution in the country.

If you have any questions, please reach out to Silver.com. Our customer service team members are available at 888-989-7223, online through our live chat, and via our email address.