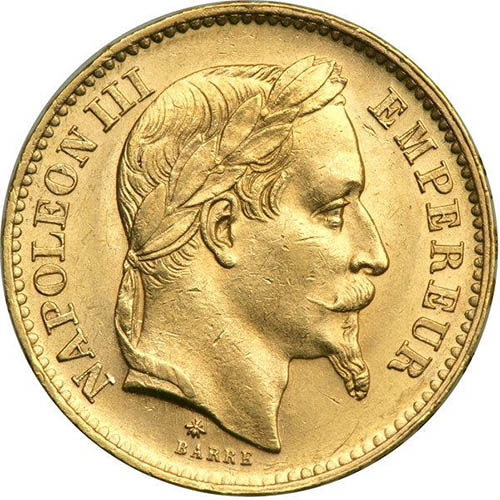 Napoleon III ruled both as the first President of France ever elected by direct popular vote, and as an autocratic ruler following the end of the Second French Republic. The nephew of Napoleon Bonaparte, his reign would end in much the same way in 1870 as he was exiled away from France. The Gold 20 Francs Coin featuring Napoleon III is currently available to you for purchase online at Silver.com.

The use of the term “Napoleons” to refer to Gold 20 Francs struck first during the reign of Napoleon Bonaparte during his reign as the emperor of the First French Empire. Following his reign and eventual exile, the nation struggled to reestablish a republic, only to see it fall back to a Second French Empire.

Napoleon III was the nephew of Napoleon Bonaparte and was initially elected by a direct, democratic vote of the people during the Second French Republic in 1848. Electing not to let go of power, Charles-Louis Napoleon Bonaparte initiated a coup in 1851 to reestablish a French Empire and ruled as it as Emperor Napoleon III from 1852 to 1870.

These Gold 20 Francs Coins were issued during the Second French Empire under the rule of Napoleon III and feature designs reflecting the empire. Each one is in average, circulated condition. This indicates that minor wear and tear is possible from handling and circulation, but major damage is not present on the coins.

The obverse of the Gold 20 Francs Coins features one of two depictions of Napoleon III. Both right-profile portraits were designed by Jean Jacques Barre, but one depicts Napoleon III with a wreath crown while the other depicts his head bare of any such crown.

On the reverse of the 20 Francs Coin, you’ll find one of two designs as well. The typical design is that of the wreath with the face value and year of issue in the center. An alternate design includes the French coat of arms with the year of issue below and the face value split on either side of the seal. Regardless of design, the inscriptions denote the existence of the empire with “Empire Francais” engraved.

We encourage Silver.com customers to contact us when buying gold. You can call our customer service team at 888-989-7223 or simply connect with us online through our live chat and email address options.