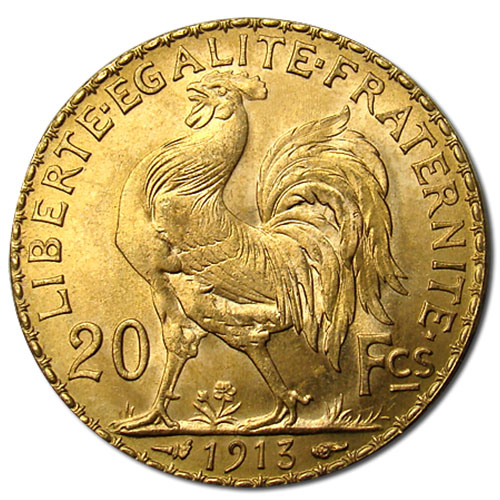 There are few gold coins floating around in circulation from the early 20th century and late 19th century that have a BU condition. When investors and collectors find this type of gold, there is little time to waste wondering whether or not to buy gold from this era. From the collectible nature of these iconic designs to the actual gold content, historic gold is a great buy! The 20 Francs Gold Coin with Marianne Rooster design is currently available to you for purchase online at Silver.com.

The 20 Francs Gold Coin was a popular denomination of coin struck on the European continent during the latter stages of the 19th century and the first two decades of the 20th century. The coins were issued by numerous countries, but only shared only a face value and gold content in common with one another. Among the nations issuing the coins, different designs emerged.

Despite those different designs, only one holds status as the most popular among them: Marianne Rooster. Issued by the Paris Mint between 1899 and 1914, the 20 Francs Gold Coin with the Marianne Rooster design was struck for use in France and gained near-immediate popularity among the French people and early gold collectors.

On the obverse of these 20 Francs Gold Coins you’ll find the famed Marianne design. To the French people, Marianne is a representation of their Liberty and logical reason. Her bust is featured in right-profile relief and is accompanied by an engraving of the words “Republique Francaise,” the nation’s official name in the French language.

The reverse of the 20 Francs Gold Coin with Marianne Rooster design features the Gallic Rooster of France, a depiction of the nation’s rich history and culture. The image of the Gallic Rooster featured here is only outdone in its popularity by the phrase captured on this side of the coin. “Liberte, Egalite, Fraternite” is inscribed on this side of the coins and translates as “Liberty, Equality, Fraternity.” This is the national motto of France, as well as the Republic of Haiti which was once a French colony.

20 Francs Gold Coins are a product of the Paris Mint. Known as the Monnaie de Paris, the Paris Mint is the government-owned institution responsible for the production today of the nation’s euro coins. The Paris Mint was founded in 864 AD, making it one of the oldest operating mint systems in the world today.

We encourage Silver.com customers to contact us with their questions. You can call us at 888-989-7223, chat with us live online, or email us directly.