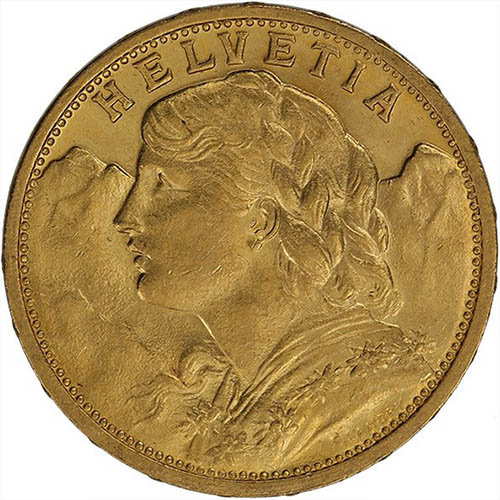 Any quantity available for $20.99 per coin over spot!

Fritz Ulyesse Landry was a Swiss medalist and sculptor born in Le Locle in 1842. He came from a family of medalists and began his training in Neuchatel. He continued his education in sculpting, artwork, and medal work under the painter Barthelemy Menn at the School of Fine Arts in Geneva. Among his many achievements was the design of Helvetia for Swiss Gold Francs.

All of the 20 Francs Gold Coins in this listing are Swiss Francs with the Helvetia design. The coins are available to you in circulated condition, which indicates the presence of normal wear and tear resulting from handling in commercial transactions. These coins were originally struck by the Bern Mint in two stages. The coins were initially issued from 1897 to 1935, with an additional coining in 1947 and 1949.

On the obverse of the 20 Francs Gold Coins available here is the image of Helvetia. The female figure depicted in left-profile relief here is known as the female personification of the nation of Switzerland. As early as the mid-1600s, the Swiss Confederacy was represented by the allegory of Helvetia, but those original figures were not singular in nature. By the mid-1700s, a common depiction of Helvetia emerged as a female figure with braided hair, a wreath symbolizing confederation, a spear in one hand, and the Swiss shield in the other.

This left-profile portrait of Helvetia was designed by Fritz Landry and used on various denominations of the Swiss Francs. His creation of Helvetia captures here from the shoulders up, with her hair braided but lacking a wreath. The sky-high peaks of the Swiss Alps dominate the background, and the name “Helvetia” is engraved above.

Please don’t hesitate to reach out to Silver.com with questions about these gold coins for sale. You can call us at 888-989-7223, chat with us live online, or email us directly.