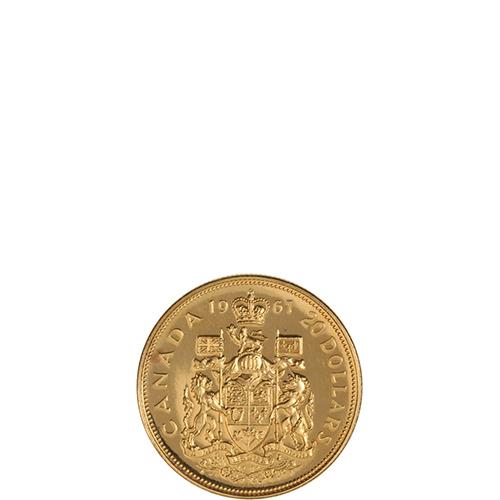 In 1867, the British colonies of Canada took the first steps toward independent governance by launching the confederation movement. As a result of this movement, the Province of Canada joined together with Nova Scotia and New Brunswick to form one federation. Today, $20 Gold Canadian Confederation Coins are available to you online at Silver.com.

All of the $20 Gold Canadian Confederation Coins available in this product listing will come with an individual plastic flip. The gold for sale in this listing was released in 1967 by the Royal Canadian Mint with a total mintage of 337,688 coins. This is a varied condition listing at Silver.com.

We cannot guarantee the condition of the coins you receive when you purchase through this listing. The coins are available in conditions that range from new to those with varying degrees of wear and tear. If you buy more than one coin, keep in mind you may receive several coins in the same condition.

This right-profile bust depicts the Queen with the Girls of Great Britain and Ireland Tiara on her head. While previous busts of the Queen from 1953 to 1964 featured “Dei Gratia Regina,” this portrait features the shortened “D.G. Regina.” This image appeared on Canadian coins from 1965 to 1989.

The reverse face of $20 Gold Canadian Confederation Coins includes the image of the coat of arms for Canada. This ornate design includes a circular crest with shield on it showcasing the Three Lions of England, Lion of Scotland, Harp of Ireland, French Fleur des Lis, and three maples leaves connected to a single stem. The Lion of England and Unicorn of Scotland support the crest, while flag poles hoist the British and French flags above.

Please feel free to contact Silver.com with any questions. You can call us at 888-989-7223, chat with us live online, or email us.