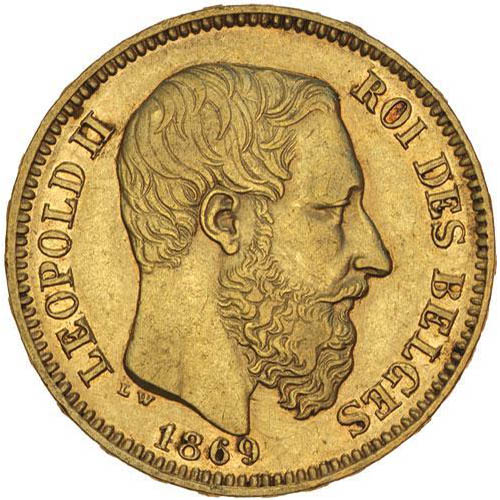 King Leopold II of Belgium was the longest-reigning monarch in the kingdom’s history, ruling for 44 years in total. Due to his long reign, his image is the primary depiction found on the 20 Francs Gold Coins issued by the Royal Mint of Belgium. Though issued during the reigns of his father before him and his nephew who followed. Right now, 20 Francs Gold Coins from Belgium are available to purchase online at Silver.com.

Each of the 20 Francs Belgium Gold Coins available from this product listing is available in a protective plastic packaging. The Royal Mint of Belgium coined these 20 Francs Gold Coins primarily between 1867 and 1882 during the reign of King Leopold II. As such, the gold coins feature an image of Leopold II on the obverse.

20 Francs Belgian Gold Coins were briefly issued during other periods during the history of the Kingdom of Belgium. During the reign of Leopold I, who established the constitutional monarchy in 1830 following independence from the Hapsburg Empire, 20 Francs Gold Coins were struck in 1834, 1835, 1838, 1841, and 1865. During the reign of Albert I, the 20 Francs Gold Coin was also struck in 1914 on the eve of World War I.

On the obverse of these 20 Francs Belgian Gold Coins, you’ll find the effigy of King Leopold II of Belgium. Leopold II was the eldest surviving, and second overall, son of King Leopold I. He enjoyed the longest reign in the Kingdom of Belgium’s history and his right-profile portrait was altered once during his 44-year reign.

20 Francs Gold Coins issued between 1867 and 1870 have a younger portrait of Leopold II with a bare head and cleaner looking beard. In the middle of the 1870 issue, Leopold II’s image was updated to feature a longer, scruffier beard that aged his look slightly. The 1870 issues could feature either of these portraits of Leopold II.

The reverse of all 20 Francs Gold Coins from Belgium features the Belgian coat of arms. This design includes a circular shield that bears a lion in the center. It is capped above by a cape with a crown at the top.

If you have any questions, please don’t hesitate to contact Silver.com. Our customer service team is available to you at 888-989-7223, chat with us live online, or email us directly.