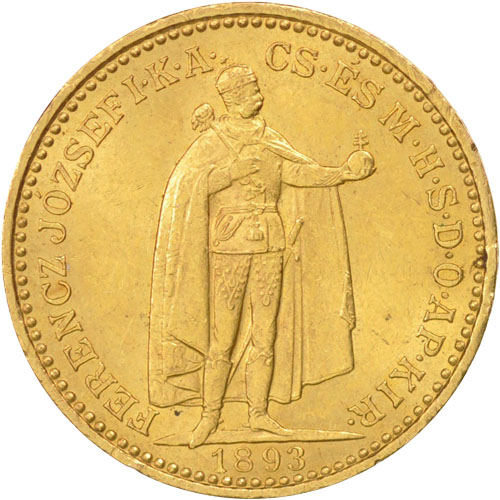 The Austro-Hungarian Empire was once the second-largest country in Europe and the third-most populous. Encompassing all of modern-day Austria and Hungary, as well as Croatia and Slovenia in southeastern Europe, the empire was also an industrial powerhouse as the fourth-largest industry-based economy behind the US, Germany, and the UK. Its joint currencies of Krones and Koronas were issued throughout the empire. Right now, Gold 20 Korona Coins from Hungary are available to purchase online at Silver.com.

Each Gold 20 Korona Coin available to you in this product listing come inside of protective plastic to preserve the coin’s condition. These Gold 20 Korona Coins were issued for the Kingdom of Hungary in the Austro-Hungarian Empire and were only available from 1892 to 1916 during the midst of World War I.

The Gold 20 Korona Coins were issued for the Kingdom of Hungary starting in 1892 to mark the 25th anniversary of Franz Joseph I’s ascension to the throne. Joseph I became Emperor of Austria at the age of 18 in 1848 and held that title until his death in 1916. The formation of the Austro-Hungarian Empire in 1867 coincided with the reinstitution of Hungary’s constitution. At this time, Franz Joseph I was also crowned King of Hungary. He would go on to become the longest reigning Emperor of Austria and King of Hungary.

On the obverse of the 20 Korona coins from Hungary, you’ll find a standing depiction of Franz Joesph I. His long rule as Emperor of Austria, covering 68 years from 1848 until his death in 1916, made him the third-longest-reigning monarch in European history. This standing depiction features Joseph I with a crown on his head, regal clothing, a scepter in his right hand and a sphere in his left.

If you have any questions, please contact Silver.com. Our customer service team is available to you at 888-989-7223, online using our live chat, and via our email address. Gold prices are constantly updated and listed on our website as well!