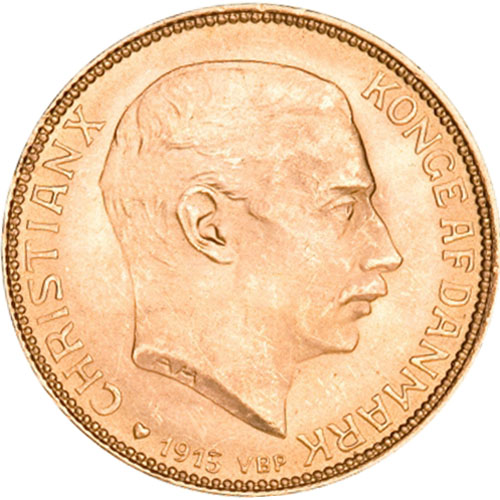 Any quantity available for $29.99 per coin over spot!

The modern Kroner is the official currency of Denmark, Greenland, and the Faroe Islands. This historic coinage was established as the official national currency of Denmark in 1875, but Kroner coins were struck in the area as early as the 17th century. One of the first coin issued as the Kroner became national currency was the Gold 20 Kroner. Today, Gold 20 Kroner Danish Coins are available to you online at Silver.com.

The Gold 20 Kroner Danish Coin was first introduced in 1873 ahead of the adoption of the Kroner as an official national currency. The move to strike gold coins came at the same time the kingdom abandoned its silver standard for backing its currency. Historically, the Kroner (singular of Krone) was introduced as a new currency format in 1619 and translated into English as crown.

All Gold 20 Kroner Coins in this listing arrive inside of protective plastic packaging. The coins available to you here today have date marks from 1873 when they were introduced until 1931 when the gold coins were halted. On the obverse, you’ll find the effigy of one of three successive Kings of Denmark.

King Christian IX reigned from 1863 until 1906, meaning that all Gold 20 Kroner Danish coins issued from 1873 until 1906 feature his right-profile bust with Danish engravings of either “Danmarks Konge” or “Konge Af Danmark.” These translate as “Denmark’s King” or “King of Denmark.”

The reverse of Christian IX’s Gold 20 Kroner Coins is unique in the use of a design similar to Liberty on American coinage. The female figure sits on a bundle of wheat holding a staff and shield. There is a herring tail visible at her feet that appears to blend into her legs on some coins, creating the illusion of a mermaid.

On the obverse of coins issued from 1906 to 1912 is the left-profile portrait of King Frederick VIII, the son of Christian IX. His short reign as King of Denmark was the result of his advanced age when he ascended the throne. Frederick VIII was 62 when he took the throne following his father’s death. Gold 20 Kroner Coins issued from 1912 until the end of production in 1931 include the right-profile portrait of King Christian X (1912-1947).

The reverse of the Gold 20 Kroner Danish Coins issued for Frederick VIII and Christian X are similar and use the coat of arms for the Kingdom of Denmark. The date mark, face value, and any mint marks are featured below the coat of arms on this side.