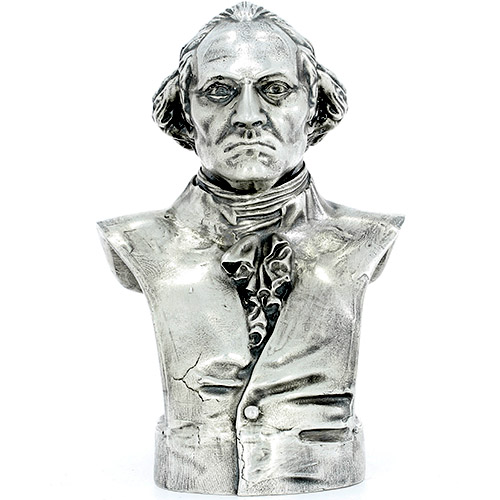 To date, there have been just 45 men to hold the office of President of the United States of America since the country declared its independence in 1776. Although you commonly hear the term “Founding Fathers,” there is one man who filled those shoes to a greater degree than others. Today, the 20 oz Antique Finish Silver George Washington Bust Statute is available to you online at Silver.com.

George Washington was one of the most prolific members of the Founding Fathers, and led the nation as ably as he could throughout his time in the public spotlight. Washington was commissioned as the Commander-in-Chief of the newly formed Continental Army during the American Revolution by the Second Continental Congress in 1775.

During the course of his career, he would go on to hold vital positions such as President of the United States, a post he held from April 30, 1789 to March 4, 1797. He was the first man to hold the post and voluntarily stepped aside after two terms in office, providing a guide that all future presidents would follow until World War II when Franklin D. Roosevelt ran and won four terms in office.

Each of these 20 oz Antique Finish Silver George Washington Bust Statues captures the general and president in his finest regalia of the day. Captured from the chest and shoulders up, you’ll see the face of a younger Washington as leader of the Continental Army.

All statues in the Presidential Busts Series are available with HotCo’s proprietary antique polish, which brings out the depth of intricacy in the details of the design. It also creates an heirloom-quality piece of silver that is perfect in any collection.

The Loved and Loathed Series kicks off this series, which includes Abraham Lincoln and Donald J. Trump along with Washington. Though revered today, in his time many thought Washington had an eye on becoming a new king over the American colonies. As such, many Americans viewed him with skepticism and feared they had replaced a tyrant from across the Atlantic with one on their own soil.

Please feel free to reach out to Silver.com if you have any questions. You can reach us on the phone at 888-989-7223, on the web using our live chat feature, and via our email address. Spot silver prices are regularly updated on our homepage for your convenience!