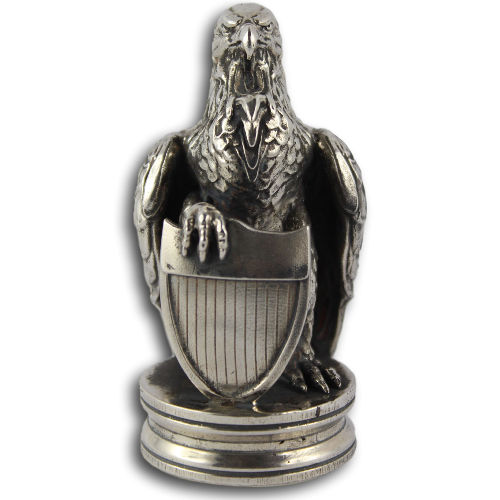 There is no singular coin in the world that is more popular than the Silver American Eagle. Available from the United States Mint since 1986, these 1 oz bullion and proof coins routinely smash sales records at the US Mint and dominate the global precious metals marketplace. A record 47.3 million coins were sold in 2015 alone. Right now, the 20 oz Antique Finish Silver American Eagle Statue is available for purchase on Silver.com.

In 1792, the fledgling federal government of the United States of America selected the bald eagle as its official emblem. Some, most notably Benjamin Franklin, had pushed for the nation to adopt the turkey as its official emblem. The bald eagle was eventually chosen because it represented longevity, majesty, and power. All characteristics the Founding Fathers saw in the young American republic.

As the first release in the Heads or Tales Coin Company’s planned statue series, this brilliant 20 oz. Antique Finish Silver American Eagle Statue features the nation’s most enduring symbol in brilliant 3D form. The American bald eagle remains a symbol of power and freedom to this day, and has been adopted by countless private companies, government agencies, and military units as the official logo.

Each 20 oz Antique Finish Silver American Eagle Statue has antiquing chemicals added to the statue, giving the product an aged appearance that can only come with time otherwise. The patina of the finish adds warmth and subtle depth to the overall design of the statue. These particular statues stand 98 mm tall, and bring the majesty of the Silver American Eagle coin series to life in 3D.

If you have any questions about this product, please feel free to reach out to Silver.com. Our customer service team members are available on the phone at 888-989-7223, online using our live web chat, and via our email address.