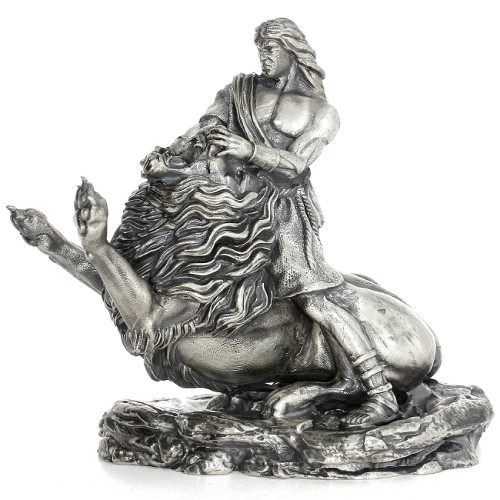 One of the more famous stories from the Hebrew Bible is that of the feats of Samson. He was the last of the judges of the ancient Israelites, and is mentioned often throughout the Book of Judges. Heads or Tales Coin Company brings one of Samson’s greatest feats to life on a towering new statue containing 20 ounces of silver. Right now, the 20 oz Antique Finish Silver Samson and the Lion Statue is available to purchase online at Silver.com.

Each 20 oz Antique Finish Silver Samson and the Lion Statue includes a proprietary antique finis that brings depth and warmth to the design, while lending the overall appearance some age and distinctive visuals. Your Samson Silver Statue ships to you inside of a protective box to keep it safe, and includes a numbered Certificate of Authenticity. These serial numbers are also found on the underside of the statue’s base.

The judges of ancient Israel were known as biblical judges, and they were viewed as rulers or military leaders who presided over legal hearings. Samson was the last of the judges, and his many feats include defeating an entire Philistine army with the jawbone of a donkey and single handedly bringing a Philistine temple to the ground with his bare hands and brute strength.

It is the story of the lion though that is among the most riveting. In this tale, Samson walks through the vineyards near Timnath and was set upon by a massive beast. As the roar of a lion shattered the air, the ferocious creature emerged from the shadows with fangs dripping in blood. It is said that in the moment, Samson’s body was emboldened by the power of the Divine Holy Spirit, giving him more strength than any other man on Earth.

The 20 oz Antique Finish Silver Samson and the Lion Statue is based upon the classical work of Cristoforo Stati, an Italian sculptor of Christian imagery from antiquity. It features Samson standing above the lion’s back, holding its massive jaws open in his hands just before he rips the beast to shreds.

Heads or Tales Coins has produced a great variety of silver statues in recent years, and this entry in the Judges Series is an exciting new offering. The 20 oz Antique Finish Silver Samson and the Lion Statue is just one of many exciting silver statues from HotCo that include depictions of fantastical beasts, as well as 3D designs of popular bullion coin programs.

If you have any questions, feel free to ask. Silver.com associates are available on the phone at 888-989-7223, online using our live chat, and via our email address.