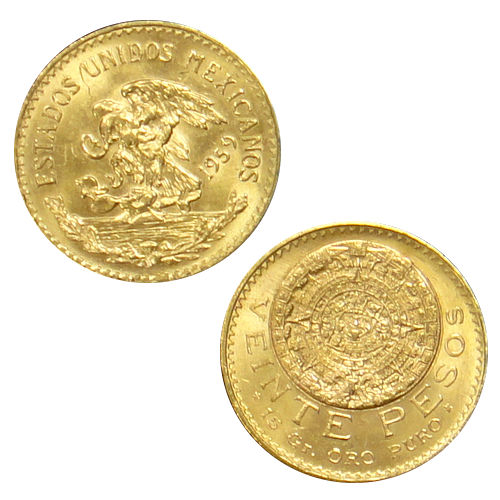 Gold coins are often issued to commemorate important moments in a nation’s history. The 20 Peso Gold Mexican Coin was produced by the Mexican Mint beginning in 1921 to commemorate the freedom the Mexican people earned at the conclusion of the War of Independence. Among the most recognizable coins in the world is the 20 Peso Gold Mexican coin, which you can purchase today on Silver.com from the year of our choice in varied condition.

Mexico began to celebrate the centennial of its War of Independence in 1910, at that time marking 100 years since the start of the war against Spain. In 1921, the nation celebrated 100 years since the conclusion of the war with the production of various Gold Mexican Peso Coins. The Mexican Mint produced the 20 Peso Gold Mexican coin, in addition to 50, 10, 5, 2.5, and 2 peso versions.

The 20 Peso Gold Mexican coin is one of the more unique coins in the series because it is the only version of the coins to include a modern rendition of the Mexican coat of arms. On the 20 peso coins, the eagle in the coat of arms is facing sideways.

On the obverse side of the 20 Peso Mexican Gold coin is the modern version of the Mexican coat of arms. Included in the image is an eagle atop a cactus, with a serpent clutched between its beak. Unlike other coins in the series, the eagle sits sideways on the coin. The year of minting and phrase “Estados Unidos Mexicanos” are engraved on this side of the coin.

The reverse side of the coin features one of the most recognizable Mexican symbols available, the Aztec Calendar. Also known as the Sun Stone, the calendar is accompanied by engravings of the face value, weight, and purity of the gold coin.

The Mexican Mint, or La Casa de Moneda de Mexico, is the national mint for Mexico. It is among the oldest in the world and ranks as the oldest recognized mint in North America. The mint’s establishment can be traced back to 1535 when Spanish conquerors sought to build the first mint in the Americas.

Silver.com wants you to be happy with your purchase. If you have any questions about the 20 Peso Gold Mexican coin, or any other product before placing your order, don’t hesitate to contact our associates at 888-989-7223. You can also use the live chat function located on our website to get in touch with a representative.