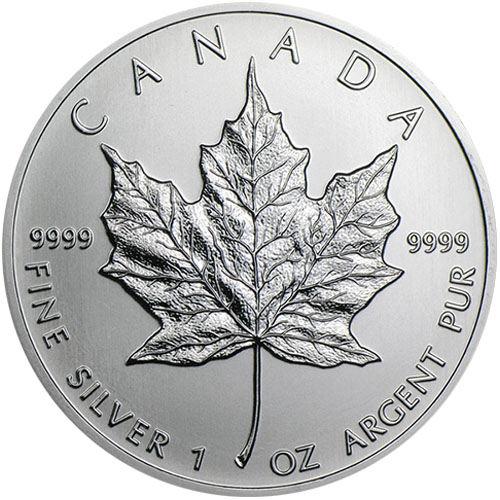 The 21st century had arrived and the Silver Canadian Maple Leaf was showing signs of life that had eluded the Royal Canadian Mint’s premier silver bullion coin collection. After lackluster performance throughout the 1990s, the 2000s started on a better foot with a mintage figure higher than half of the years in the 1990s. Right now, 2000 1 oz Silver Canadian Maple Leaf Coins are currently available to purchase online at Silver.com.

Heading into the 21st century, silver prices had remained steadily higher than the early 1990s. Prices began to rise in 1991, but held steady in the mid-$5 range throughout most of the decade for an annual average. In 2000, the annual average price of silver per ounce was actually slightly lower than the previous decade, holding a steady price average of $4.95 per ounce.

On the obverse of the Silver Canadian Maple Leaf you’ll always find the effigy of the reigning monarch from England. In the case of the Silver Maple Leaf from 2000, it’s the third-generation portrait of Queen Elizabeth II. Designed by Dora de Pedery-Hunt in 1990, it captures the image of Her Majesty at 64 years old.

The reverse of the 2000 1 oz Silver Canadian Maple Leaf Coin features the sugar maple leaf design. Created by Walter Ott in 1979, this iconic image has appeared across the Canadian Maple Leaf series from the gold and silver coins to the platinum and palladium options.

Founded in Ottawa in 1908, the Royal Canadian Mint is the official sovereign mint of Canada. The mint operates its original facility in Ottawa, supported by a newer facility opened in Winnipeg in the 1980s.

If you have questions, please contact Silver.com. Our customer service associates are available to help you at 800-276-6508, online through our live chat, or via our email address.