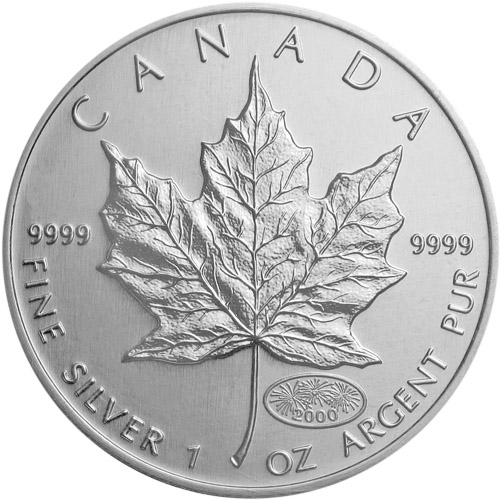 Introduced in 1988, the Silver Canadian Maple Leaf was the world’s first-ever .9999 fine silver bullion coin. Just one year after it was introduced, the series featured its first-ever privy mark on one of the coins. Since that time, countless privy mark releases have featured in the series. Today, 2000 1 oz Fireworks Privy Silver Canadian Maple Leafs are available to you online at Silver.com.

Queen Elizabeth II is shown on the obverse side of 2000 Fireworks Privy Silver Canadian Maple Leafs. This right-profile portrait of the Queen shows Her Majesty wearing the George IV State Diadem Crown on her head and was designed in 1990. This bust is the third-generation effigy of the Queen on Canadian coins and the first from a Canadian artist. It was designed in 1990 by Dora de Pedery-Hunt.

Please feel free to reach out to Silver.com with any questions. Our team is available to assist you on the phone at 888-989-7223, on the web using our live chat, and via our email address.