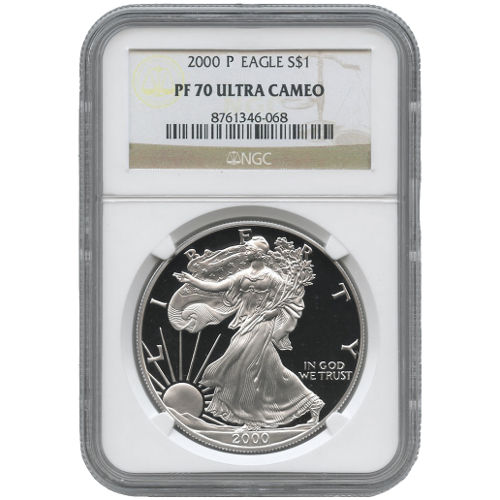 The 2000 release of Silver American Eagles marked the last time the coins would be regularly struck at the Philadelphia Mint. The proof coins had been in Philadelphia since 1993, and would transition to the West Point Mint in 2001. The bullion coins were struck in Philadelphia in 1999 and 2000, and also shifted to West Point.

Mintage across both the proof and bullion coins increased in 2000, with the overall program gaining nearly 2 million coins. Bullion coins hit 9.2 million in total, with 2000-P Proof Silver American Eagle coins hitting 600,000 in mintage. The sale of proof coins represented a complete sell out of the maximum mintage of 600,000, which had increased from the US Mint for a second year.

Each 2000 Proof Silver American Eagle available to you today is a PF70 specimen from the NGC. These coins exhibit full, original mint luster and include no detracting flaws. UCAM coins, such as these, have strong, frosted matte finishes on the design set and deeply-mirrored, clear background fields.

On the obverse is Adolph A. Weinman’s Walking Liberty image, which was originally created in 1916. The reverse features a modernized interpretation of the heraldic eagle of the United States from former-Chief Engraver of the US Mint, John Mercanti.

The price of silver remained low in 2000, with the average per-ounce price throughout the course of the year sitting around $4.90.

Please direct your questions to Silver.com associates at 888-989-7223. You can also connect with us online using our live web chat and email services. If you are looking for similar products, be sure to check out our full selection NGC Graded Proof Silver Eagles.