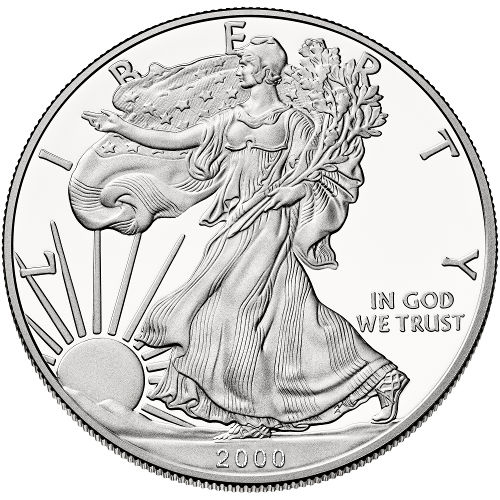 The Silver American Eagle entered the 21st century with a bang in 2000, producing one of the highest mintage years in program history. With 9.8 million coins struck in 2000, the only higher mintage levels to date at this point in program history came in 1987 when demand for the new (at that time) coins skyrocketed. Right now, the 2000-P Proof Silver American Eagle is available for purchase on Silver.com.

Silver American Eagle coins were growing with each passing year at the dawn of the 21st century. A sagging American economy was having a negative impact on market portfolios, and investors increasingly sought out the government-backed purity and silver content of the nation’s official bullion coin as an escape from market woes.

Proof Silver American Eagles had a more modest increase in 2000 of just 51,000 coins. However, the 600,000 coins minted in 2000 is almost double the number of proof coins struck in 1994 when mintage hit an all-time low in program history.

If you have questions, Silver.com associates are available to help. You can reach us on the phone at 888-989-7223, chat with us live online, or send us an email with your questions. If you are interested in similar products, view our selection of Proof Silver Coins.