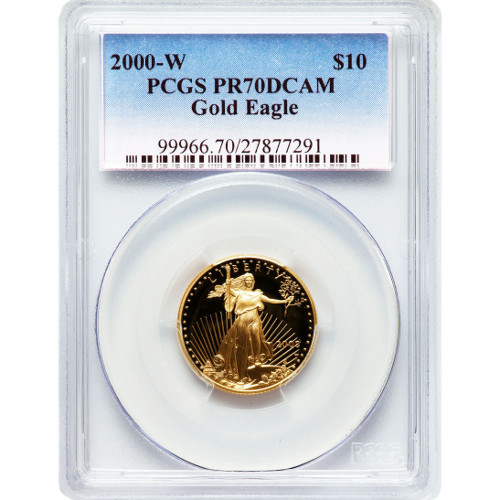 Coins with a deep cameo, known as DCAM, are those which have a deeply mirrored, clear background field that features an overlaid design that is strong and frosted. The US Mint achieves this visual appearance by striking each coin multiple times using special proof dies. The PR70 grade on these coins indicates that each is considered perfectly struck by the Mint.

On the obverse is Augustus Saint-Gaudens’ Lady Liberty depiction. She is surrounded by engravings of “Liberty,” “2000,” and 50 stars, representing each US state. The “W” mint mark is featured under the year of minting, and identifies the coin as a product of the West Point Mint.

The reverse features the image of a family of nesting eagles, with the male eagle returning with an olive branch in its talons. Sculptor Miley Busiek was commissioned to create the design in 1986, specifically for use on Gold American Eagles.

Congress authorized the creation of the United States Mint in 1792 with passage of the Coinage Act. Operating four state-of-the-art facilities across the United States, it is one of the most respected mints in the world. If you have questions for Silver.com associates about these Proof Gold Eagles, don’t hesitate to contact us at 888-989-7223 or online via our live chat service.