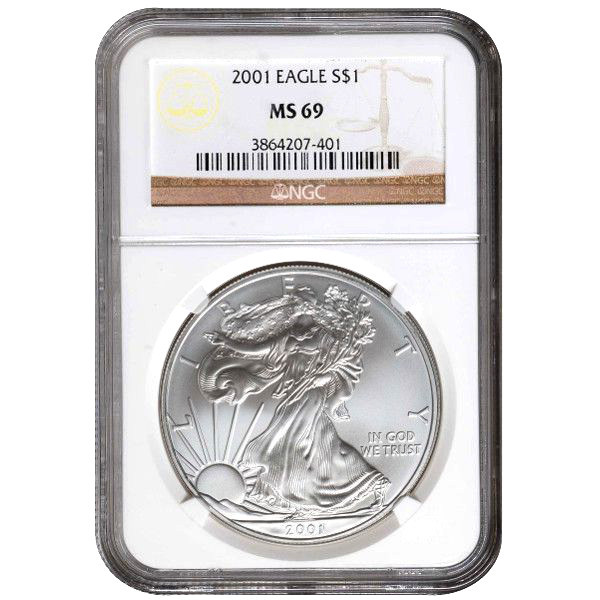 At the start of the 21st century, the Silver American Eagle coin emerged as one of the most in-demand silver bullion products in the world. Demand skyrocketed with the approach of Y2K, and throughout much of the first decade of the 2000s, the coins demand has remained steady. Today, you can purchase a 2001 1 oz. Silver American Eagle coin from Silver.com with a near-perfect MS69 grade from the Numismatic Guaranty Corporation.

The NGC is one of the world’s toughest coin grading services. In order to earn a Mint State 69 grade, coins must have their full, original luster for date and mint. In addition, there can be no more than two blemishes on the surface of the coin. While the coins in this product listing may have miniscule detracting marks, you’ll find no hairlines and no flaws in the primary visual areas of the coin.

On the obverse side of each coin is Weinman’s Walking Liberty. In the image, Lady Liberty is featured in full-length relief walking toward the setting sun. With her right hand outstretched, her left hand holds a bundle of oak and laurel, while the American flag keeps her shoulders covered and warm.

The reverse side of the coin features imagery designed by John Mercanti, a chief engraver with the United States Mint. His depiction includes a bald eagle resting behind a shield. The eagle clutches the arrows of war in one talon, and an olive branch of peace in the other.

The United States Mint, founded in 1792, is one of the oldest facilities in the Western Hemisphere. The Mint operates four primary coining facilities in San Francisco, Denver, Philadelphia, and West Point. All of these, with the exception of Denver, contribute to production of Silver American Eagles.

We encourage all of our customers to ask questions when they arise. A Silver.com associate will be happy to answer any questions regarding this product listing. You can reach us at 888-989-7223, online using our web chat, and via email.