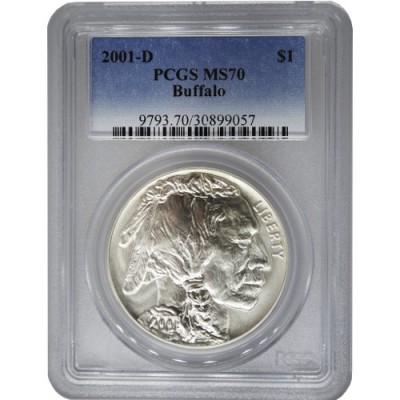 One of the most popular coin designs in American history came from James Earle Fraser, who was one of many artists commissioned by the US government and United States Mint in the early 20th century to help redesign the nation’s currency. Fraser’s Indian Head, or Buffalo Nickel, design lives on today as one of the most iconic designs of all time. Today, it’s available to you on the 2001-D US Mint Silver Buffalo Coin through Silver.com.

Fraser grew up on the Midwestern plains of the United States in the late 19th and early 20th centuries. Born and raised in Winona, Minnesota, he was accustomed to the frontier life and brought his memories to bear in creating much of his art. The Buffalo Nickel he designed in 1913 remained in circulation on the nation’s five-cent piece through 1938.

Each of the coins in this Silver.com product listing is considered a perfect specimen by the PCGS. Coins with an MS70 grade have their full, original mint luster and absolutely no detracting flaws such as blemishes, contact marks, or hairlines.

On the reverse face of the coin is the image of Black Diamond, a buffalo that had residence at the Central Park Zoo in New York City during the early 20th century. The obverse face of the coin features Fraser’s depiction of a Native American chieftain, which was inspired by the facial features of three real-life chieftains of the early 20th century.

The United States Mint struck the Silver Buffalo Coin for just one year in 2001, and used its Denver Mint facility only. Today however, Fraser’s design lives on as the face of the Gold American Buffalo coin, a 24-karat gold bullion coin from the US Mint.

Please direct your questions to Silver.com associates at 888-989-7223, chat with us live online, or connect with us via email.