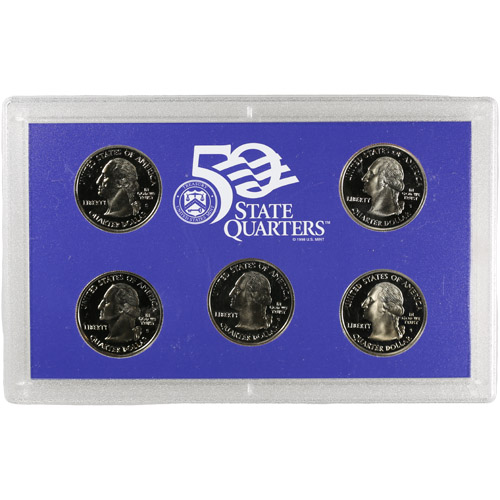 In 1999, the United States Mint launched an ambitious circulation commemorative series that would not only reignite interest in coin collecting in the United States, but would also lay the groundwork for a follow-up circulation series and a silver bullion collection. The State Quarters Program was a smash-hit with Americans and came with individual releases, as well as commemorative sets from the mint. Today, 2001 US Mint Proof Quarter Sets are available to you online at Silver.com.

The United States Mint’s State Quarters Program was introduced in 1999 with five designs representing the first five US states to ratify the United States Constitution after the nation’s founding, and thereby be admitted as new states in the Union. The series would go on to continue featuring five states per date mark, concluding with some of the newest states in the Union in 2008, including designs that year for Oklahoma, New Mexico, Arizona, Alaska, and Hawaii.

All of the 2001 US Mint Proof Quarter Sets come with a hard plastic case containing five individual 2001 US Quarters. These quarters have individual reverse designs representing the states of New York, North Carolina, Rhode Island, Vermont, and Kentucky. The coins are all proof specimens with frosted designs and mirrored fields, but come with the cupro-nickel alloy the US Mint uses for circulation pieces.

On the obverse of each 2001 US Mint Proof Quarter is a portrait of President George Washington. The First President of the United States of America has featured on the US Quarter since 1932 when John Flanagan developed a left-profile portrait for the bicentennial of Washington’s birth. The reverse fields of the quarters in the 2001 US Mint Proof Quarter Set come with individual designs representing each of the states. The states featured in 2001 were all admitted into the Union between 1788 (New York) and 1792 (Kentucky).

Please contact Silver.com with your questions. Our team is available on the phone at 888-989-7223, online using our live chat, and via our email address.