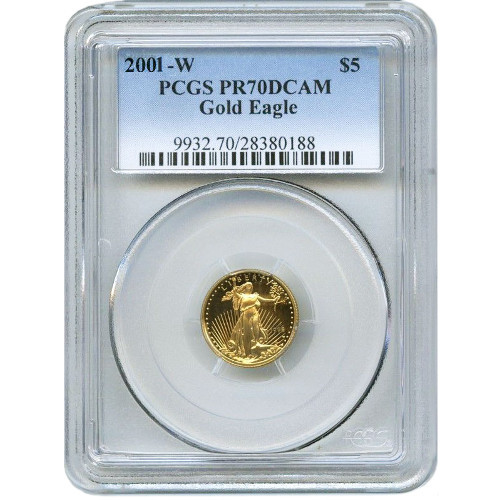 In 2001, the United States Mint released the 15th anniversary coin in the Gold American Eagle series. After the first coins were struck in 1986, the popularity of America’s official gold bullion coin skyrocketed. The smallest of the coins in the series is the 1/10 oz, $5 denomination. Today, you can own one of the coin’s from the 15th anniversary by purchasing a 2001-W 1/10 oz Gold American Eagle coin from Silver.com with a PR70 grade from the Professional Coin Grading Service.

The Gold American Eagle program was launched in 1985 in an attempt to provide collectors around the globe with a gold bullion coin to match the gap in supply following stiff restrictions on the South African Krugerrand. Collectors quickly flocked to the Gold American Eagle, as the coin series has risen to international prominence in the decades since. The coins are struck each year in four weights: 1 oz, 1/2 oz, 1/4 oz, and 1/10 oz.

These 2001-W 1/10 oz Gold American Eagles are graded PR70 by the PCGS, which means they are viewed as perfectly struck proof coins. By definition, deep cameo (DCAM) signifies a strong, frosted design set against a deeply mirrored, clear background field. The “W” mint mark on this coin identifies the coins as a product of the West Point Mint.

Originally featured on the $20 Saint-Gaudens gold coin in 1907, Lady Liberty is on the obverse side of the Gold American Eagle. Created by famed sculptor and artist Augustus Saint-Gaudens, Lady Liberty strides over Washington DC with the guiding light of a torch in her right hand. The reverse features Miley Busiek’s image of a family of nesting eagles, giving the coin its name. In the image, a male eagle returns to the female and hatchlings in the nest with an olive branch.

The United States Mint operates four state-of-the-art facilities across the country in San Francisco, Philadelphia, Denver, and West Point. Established by an act of Congress in 1792, it is one of the oldest mints in the Americas.

If you have questions about Silver.com products or the online purchasing process, you can reach our associates on the phone at 888-989-7223. We are also available online by using our live web chat and email services.