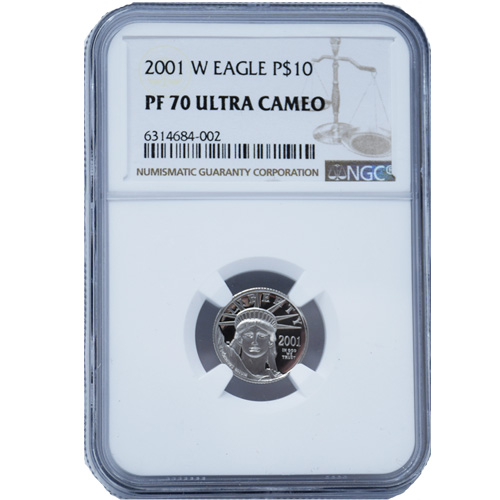 The Platinum Eagle Series from the United States Mint debuted in 1997 with BU and Proof coins available. From 1997 to 2008, the coins were available in 1 oz platinum, as well as 1/2 oz, 1/4 oz, and 1/10 oz platinum options. The Proof Platinum Eagles made an immediate splash with collectors as the first-ever American Eagle variant to change design elements each year.

While Liberty remained a constant on the obverse of the coins up until 2017, the reverse of the Proof Platinum Eagles changed each year. The 2001 coin was released during the first design series in the program’s history, the Vistas of Liberty Series.

The obverse of these 2001-W 1/10 oz Proof Platinum American Eagles features a front-facing effigy of Liberty. Designed by John Mercanti, it shows the face of Liberty from the Statue of Liberty with her large, spiked crown and stoic visual appearance.

On the reverse side of 2001-W 1/10 oz Proof Platinum Eagles is an image of the American bald eagle in flight. Based on the original 1997 design from Thomas D. Rogers, this particular image of the eagle shows it flying over the deserts of Arizona with its robust Saguaro cacti visible across the horizon. This design was the fourth of the Vistas of Liberty Series.