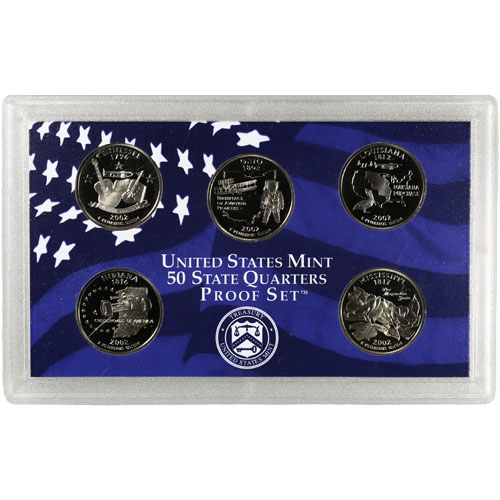 The State Quarters Program offered individual designs on the reverse of circulation quarters to represent all 50 states in the United States of America. The coin program featured the states in the order which each one voted to ratify the United States Constitution or was later adopted into the Union in the years after the founding of the nation.

The obverse of the quarters in the 2002 US Mint Proof Quarters Set features an effigy of President George Washington. This portrait has graced the US quarter since 1932 and was designed that year by John Flanagan to replace the previous Standing Liberty Quarter design. On the reverse of the coins in these 2002 US Mint Proof Quarter Sets are designs honoring the five states featured in 2002 in the series. These include designs celebrating the admission of Tennessee, Ohio, Louisiana, Indiana, and Mississippi.

These 2002 US Mint Proof Quarter Sets are available to you for purchase online with a hard plastic case. The case includes a total of five individual 2002-dated quarters. Each coin is a cupro-nickel specimen as used in circulation coinage, with proof visuals that include frosted designs and mirrored fields.